You know you've got it coming;
I'll tell it to you straight.
I'm coming for you very soon;
I'll never hesitate.

Coming very soon,
I'm coming for you.
Any day now... 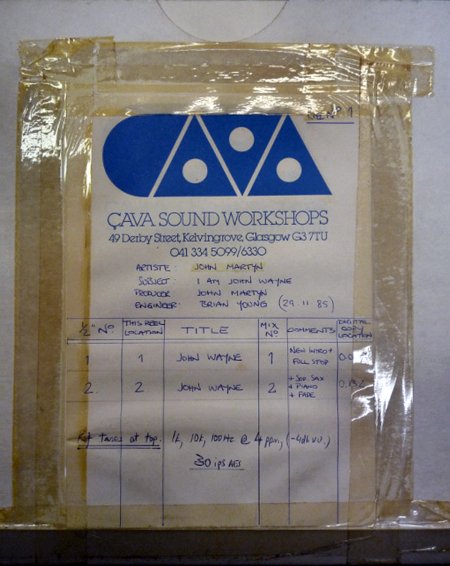 "I was really pissed off with an ex-manager of mine and I was sitting down writing these very vindictive 'I'll get ya, I'll get ya ...' Then I realized what a self righteous little prick you sound like, this is really stupid, who's the biggest self-righteous twit you can think of? ... And it was John Wayne, so I slid him in to confuse the thing in my own brain."

To get the effect he wanted John insisted on going out and getting completely rat-arsed. By all accounts this feat was achieved in a very short space of time, completing the song in one take with what John describes as his: strangled duck vocal. Island agreed with a mean 12" dub version in the pipeline, which Island America pulled for fear of legal repercussions arising from the use of the name John Wayne. There was a promo 12" actually released in Canada, though, but this is not a dub version.

The track for Piece By Piece was finished 29 November 1985. November 2012, John Hillarby posted an interesting entry revealing that there were two versions of John Wayne made. The first one apparently had a "New Intro" and a "Full Stop". The second one, which starts 13 minutes into the tape, had a soprano sax, piano and a fade out. Which means that this is the one that made it to the album.

| Paul Hillery
@bigmuffsite found this but didn't see it on your concert list https://t.co/NurVAf1AVs
2 months 2 weeks ago
END_OF_DOCUMENT_TOKEN_TO_BE_REPLACED