The Road To Ruin (remastered & expanded)

Of all the musicians to emerge in the British folk boom of the mid-1960's, John Martyn is surely the most progressive and one of the most influential. His music has explored folk, jazz, blues and rock styles and continues to inspire successive generations of musicians. Martyn was born Iain David McGeachy in September 1948 in New Malden in Surrey, although he grew up in Glasgow when his parents separated.

At the age of fifteen he taught himself to play the guitar and by the time he left school at the age of 17 he was a regular feature in local Glasgow folk clubs, coming under the wing of local folk musician Hamish Imlach, who encouraged his musical development and understood his young protégé, who at this stage was finding his own style, influenced by such diverse spheres as classical music and baroque folk guitarist Davey Graham. The young McGeachy also befriended Clive Palmer, founder of the highly influential Incredible String Band. Encouraged by the response to his music in Northern folk clubs he made his way to London, attracting attention through initial performances at London clubs such as Bunjies and Les Cousins. At the suggestion of his first agent he soon changed his name to John Martyn, taking his new surname from the makers of his favourite acoustic guitars, substituting the letter 'i' for a 'y'.

Through his appearances on the Soho folk scene he came to the notice of Chris Blackwell, who had recently moved the focus of his label, Island records, from West Indian music to British rock and folk music. In 1967 John Martyn became one of the first British signings to Island Records, recording the embryonic London Conversation album for a budget of £158. An album of simple, beautifully played music, upon its release in October 1967, it received critical acclaim and sold sufficiently well for Martyn's contract to be extended by Island. His follow up album, The Tumbler, released in December 1968 was a massive leap forward creatively and was the first of Martyn's records to demonstrate a jazz influence. Produced by fellow folk musician Al Stewart and featuring the talented jazz flautist Harold McNair, the album featured fine material such as Dusty, Flying On Home and Hello Train. In January 1969 Martyn met singer Beverley Kutner at a concert supporting US singer Jackson Frank at Chelsea College of Art. Beverley was also a figure on the London folk scene and had been a friend of Paul Simon when the American singer-songwriter had lived in London. After Simon found success with Art Garfunkel, he secured her appearance at the 1967 Monterey Pop Festival. When she met John she was in the process of working on solo material for producer Joe Boyd's Witchseason Productions and was looking for musician's to work with. She later recounted "He was individual, rakish, all curly hair and smiles. He seemed like the ideal guy to help me out, plus of course it helped that I fancied him like mad". John and Beverley soon became romantically involved and married in 1969. Joe Boyd had secured interest from Warner Brothers records in America in releasing an album by Beverley and it soon became apparent to Boyd that the potential of the husband and wife recording as a duo could be creatively fruitful.

Negotiations with Warner's were completed and in the early Summer of 1969 he and Beverley travelled to the USA, basing themselves in the musician's haven of Woodstock in upstate New York. The area was soon to become internationally famous thanks to the celebrated rock festival that took place later that year and also due to Bob Dylan and The Band becoming residents, recording their infamous "basement tapes" sessions there and setting the scene for The Band's masterpiece Music From Big Pink (a big influence on John at that time). John and Beverley soon integrated themselves into the local musical social scene, befriending drummer Levon Helm of The Band and their near weekend neighbour, Jimi Hendrix. John would later recount "Hendrix lived virtually next door to us. He used to arrive every Thursday in a purple helicopter, stay the weekend and would leave on Monday".

In Woodstock, the duo formulated their musical ideas, writing new material and reworking songs written in England earlier that year. Within weeks John and Beverley Martyn were ensconced at A&R studios in New York City with producer Joe Boyd to record their first album together. The majority of the songs recorded were John Martyn compositions, perhaps revealing his musically dominant influence within the duo and in just six days ten songs were laid down, featuring various guest musicians such as Levon Helm, Mother's of Invention drummer Billy Mundi, percussionist Herbie Lovell, bass guitarist Harvey Brooks and keyboard player Paul Harris (also known for his work with The Doors and John B. Sebastian). Harris' highly original arrangements and musical direction would become a defining feature of the album.

John Martyn would later remark "A lot of things came from those sessions. Nobody had really thought of combining acoustic instruments with drums before then. It sounds a little conceited to say that, but I think that the album was rather ahead of its time". The recordings would also feature the debut of Martyn's use of the Echoplex tape loop delay unit, an effect which would define his guitar sound and his music over the ensuing few years. Released in February 1970, Stormbringer, housed in a striking sleeve designed by Nigel Waymouth of Hapshash and the Coloured Coat fame, was critically well received, although the album failed to make an impression on the album charts in both Britain and America. With much of the critical praise for the album focussing on his guitar playing and vocal delivery, Island records were enthused enough to continue to support the duo's music, although John resisted pressure to perform and record as a solo artist again. Instead, both musicians concentrated on writing new material for their next album. In the late Spring of 1970 work began at Sound Techniques studio with Joe Boyd assuming production duties once more and with John Wood engineering.

From the start of recording it became apparent that John Martyn and Joe Boyd had considerable differences of opinion when it came to the production style of the music. Martyn was keen to explore a spontaneous approach to recording, focussing on atmosphere rather than technical perfection. John was also exploring other musical directions and influences. In a later interview he recalled; "By the time Beverley and I recorded our second album my ears were opening a little and I was listening to a lot more music. I'd been to a lot more gigs and was hanging out with other musicians non stop. I was exposed to more music every day through other people's record collections, gigs they took me too and gigs I went to on my own".

The material recorded would have a more collaborative feel between the duo than their debut album. Auntie Aviator, Sorry To Be So Long and Say What You Can were joint compositions. Beverley contributed the excellent Primrose Hill, whilst John composed the wonderful Parcels, New Day, Tree Green and Road To Ruin. Boyd had enlisted the services of some highly respected session musicians to assist with the recordings, notably jazz musicians Ray Warleigh and Lyn Dobson, and bass guitarist Dave Pegg.

In hindsight, the sessions would be the launch pad and blueprint for John's solo career for the next five years. The recording of the song New Day would have lasting repercussions for John, as it was his first studio session with former Pentangle double bassist Danny Thompson. Thompson's unique style would grace most of John's recordings for the next decade and he would prove a worthy musical sparring partner both on and off stage. Another notable recording was Give Us A Ring, written for John's friend and musical cohort Nick Drake.

Sessions continued until July 1970, when the Beverley Martyn song Here I Am Now was recorded. The track only received a mono monitor mix before it was consigned to the vaults. Thirty five years on, the song finally receives the release it deserves as a bonus track on this expanded CD reissue. The Road to Ruin was released as Island ILPS 9133 in November 1970, housed in another striking Nigel Waymouth sleeve. Bizarrely, the song Say What You Can was credited on the original artwork as being Let It Happen. Despite some very favourable reviews, the album followed the fate of its predecessor by failing to break into the UK album chart.

John, in typically honest fashion, soon began to state publicly that he was dissatisfied with the finished results. "I think the album was compromised in terms of spontaneity" he later stated. "The over dubbing is too apparent in places and sounds cluttered on occasions, robbing the record of 'feel' and confidence that my later albums had in abundance".

In hindsight, his comments seem rather unfair, as the musical input of all concerned was of an extremely high standard, and the album can now be seen to be a pivotal point in John's career. By the early months of 1971, Beverley Martyn was pregnant with the couple's second child and the prospects of her being able to continue a musical career at that time were remote. Concerned over the lack of sales of Stormbringer and The Road to Ruin, Island records began to put pressure on John to revert to working as a solo artist. "The record company weren't too wild about Beverley" he later recalled. "They began to put pressure on me to record on my own".1 With John not being in a position to dictate his direction to Island records, arrangements were made for John to record another solo album. Relocating his family to the seaside town of Hastings, John began work on material for an album that would become his first milestone, the marvellous Bless The Weather. 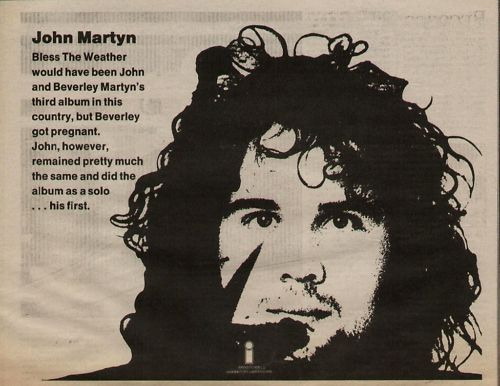 sitenotes:
1 There are different versions as to why John started to record solo. The one related here is rather problable. In the same period Island published an interesting advert that does not really explain much but proves they were promoting John as a solo artist. Even though they were apparently unaware of John's first two releases.
Related to:
The Road To Ruin (remastered & expanded)