In the summer of 1977, Chris Blackwell asked me to work with him on John Martyn's new LP 'One World'. Chris planned to use the Island Mobile and record for three weeks at this house in Theale. This is where I had recorded overdubs for Robert Palmer's 'Pressure Drop' album, two years earlier, and Chris like the idea of recording outside. He had been impressed by the apparent ease of working this way, the great sound and ambience of vocals and instruments and the extra freedom when working from home. The house was almost totally surrounded by a flooded disused gravel pit - a large lake with a house in the middle.

We set up the mobile on Saturday the 16th of July 1977 in the courtyard, from where we had easy access to a barn and to the converted stable block. While we were working on the album, Ray Doyle (mobile), Barry Sage (assistant), John Martyn and I all lived in this stable block, which had four bedrooms, a kitchen and a bathroom. There was also a large self-contained flat at the far end. This we used as our main studio, and I put John, f/x pedals, drum machine, amplifiers and guitars in the main 15ft by 12ft room. I took direct injection feeds from the guitar and every f/x pedal, as well as miking up the amplifier Ray. Barry and I spent a great deal of time making sure the feeds were as clean as possible. 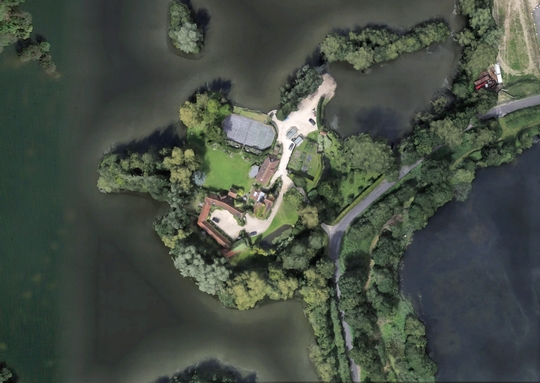 This is Woolwich Green Farm, the house near Theale where
One World was recorded. It is surrounded by water,
and Phill Brown used this for subtle effects.

We hired a PA system and set the monitor stack up on the far side of the stables pointing out across the lake. I used two Neumann U87s on the opposite side of the house, to mike up the outdoor PA sound coming back off the lake. A further two Neumann U87s were placed close to the water's edge, as far away as our leads would allow. These picked up the sound of water lapping, and a distant 'strangled' sound on the guitar which was perfect for lead solos. We tried to protect the microphones from the damp night air using polythene, with limited success. When they 'went down', on particularly wet nights or because of a heavy dew, we replaced them and then dried out the originals. Between 3am and 6am was the toughest time on the mikes, but these quiet hours before dawn created the most magical atmosphere for recording, resulting in two of our classic masters - the title track, 'One World', and my favourite, 'Small Hours'.

We fell into a routine, starting at about two in the afternoon and working through until five in the morning. Chris would spend the mornings on the phone, taking care of any business. Ray and I would check the equipment (especially the microphones), line up the tape machines, lie in the sun, or row the rubber dinghy out on the lake, taking photographs. It was an idyllic way to record an album.

I used six tracks for the guitar, two for the outdoor returns and two more for vocal and basic drum machine. I had control over the blend of the six main guitar sounds because of our separate D/I feeds. These included one feed straight out of John's guitar, another after his compressor, one each pre- and post-F/X and echoes and finally, one 'with everything' but pre-amplifier.

Some of the songs, like 'Dealer' and 'Certain Surprise', were arranged and recorded quickly and easily. Others such as 'One World' and 'Small Hours' were played repeatedly for many hours. Chris and I would then edit the multi-track into an arrangement of verse, chorus and instrumentals, from time to time taking bets on which bar we were on.

The outside mikes not only picked up the guitar coming back across the lake, but also recorded scurrying animals, birds, and the sounds of water lapping at the water's edge. John worked in the self contained flat, and Ray, Barry, Chris and myself were in the mobile. We changed the reels of tape every half hour (we were recording at 15 i.p.s) and took breaks every three or four hours for tea.

I had first met John back in 1971 at Basing Street. Like Alan Spenner and Paul Kossoff, John was difficult to get to know at first and would conceal his true feelings with a sharp tongue or within an alcohol-induced haze. John also gave off a strong impression that he could be physically aggressive if pushed, although this may have been self-preservation and merely a bluff, as in the case of Alan Spenner. I liked John and had always got on well with him, never having had any real trouble with his behaviour. He was then close to 30 years old, 5'10", with a mass of curly dark hair, a beard and moustache and a round boyish face. He lived in blue jeans, shirt, a scarf tied round his neck and a black jacket or waistcoat. If he was sober and in a good mood he would be mellow and laid back, charming, inventive, verbally amusing and spiritually alive. When dark, drunk or angry he managed to reverse all these attributes and could become difficult, aggressive, loud and obnoxious or alternatively, very quiet and depressed.

Andy Newmark came out for a day and played drums on 'Dealer', 'Smiling Stranger', 'Certain Surprise' and 'Big Muff'. We set him up in the barn, giving him plenty of drum machine click track in the headphones to help him stay in time with John's original performances. There were only two takes per song from Andy. He was really on form - a wonderful day.

Steve Winwood and Danny Thompson also came out for a couple of days and tried out ideas on most of the songs. They were set up in the self-contained flat with electric piano, Moog and bass. Although we recorded many ideas and parts, on the final album versions, we kept only the Moog on 'Small Hours' and 'Dealer' and the acoustic bass on 'Couldn't Love You More' and 'Certain Surprise'. Fortunately on this 'Best Of...' album, many of the 'One World' alternative mixes are included.

During our three weeks of recording the album 'One World', we captured hours of great takes on a number of brilliant songs: the edgy, nervous 'Dealer', the haunting, womb-like throb of 'One World', the dark psychedelia of 'Smiling Stranger', the fresh celebration of 'Dancing' and the magic, hypnotic 'Small Hours'. Many of the songs recorded included live mastered vocals from John who at one moment might be sounding warm, mellow and easily in control and at the next would travel to a place of uncomfortable darkness, becoming someone obviously on the edge of his emotions.

Related to:
Another World

| Big Muff
Eleven years... But #johnmartyn is still selling tickets, like at the Eindhoven Muziekgebouw Frits Philips for The John Martyn Project
6 hours 8 min ago

| Into the Trees.
@David_Lofts @bigmuffsite That's really great. You sing that really beautifully - I'm not often taken with other p… https://t.co/3uovZ520tI
1 week 3 days ago

| David Lofts, Esq.
@LostChordof1963 @bigmuffsite Not so much these days but yes.... Here's something from a few years ago... https://t.co/jwV1jSBWV8
1 week 3 days ago
END_OF_DOCUMENT_TOKEN_TO_BE_REPLACED