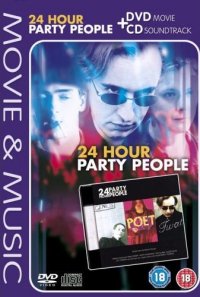 From Punk To Rave

John Martyn is present with Solid Air, but not on the soundtrack CD.

"The unbelievably true story of one man, one movement, the music and madness that was Manchester."

Manchester 1976: Cambridge educated Tony Wilson (Steve Coogan), Granada TV presenter, is at a Sex Pistols gig. Totally inspired by this pivotal moment in music history, he and his friends set up a record label, Factory Records, signing first Joy Division (who go on to become New Order) then James and the Happy Mondays, who all become seminal artists of their time. What ensues is a tale of music, sex, drugs, larger-than-life characters, and the birth of one of the most famous dance clubs in the world, The Hacienda - a mecca for clubbers as famous as the likes of Studio 54. Graphically depicting the music and dance heritage of Manchester from the late 70's to the early 90's, this comedy documents the vibrancy that made Mad-chester the place in the world that you would most like to be.

sitenote:
I am also pretty convinced to have heard some One World in this highly amusing film. About ten minutes into the film one can clearly hear familiar sounds playing in a lounging environment. This is just before the punk outbreak, which is well chosen. The plot suggests it is 1976, though, which is not quite correct as One World surfaced november 1977.

| Paul Hillery
@bigmuffsite found this but didn't see it on your concert list https://t.co/NurVAf1AVs
10 months 3 weeks ago
END_OF_DOCUMENT_TOKEN_TO_BE_REPLACED