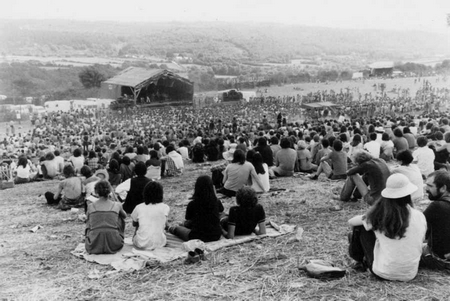 His fingers didn't leave his hands

John Martyn grits his teeth, rocks back on his chair and rolls his guitar across his knee as a wave of sustained notes surges through Dallas Brooks Hall. The scene is Wednesday night's concert. He is playing Inside Out [sic], a stunning combination of virtuosity on amplified acoustic guitar involving the use of Echoplex, wah-wah pedal, stereo projection and lyricism. The concert, a blend of folk, rock and Caribbean influences, was a success.

PRESUMABLY, John Martyn, who's been around so long even his most devoted followers must take him for granted, doesn't give a monkey's toss about Making It In A Big Way, but there's still no excuses for the performer's lackadaisical attitude at the Rainbow last Monday.1
That the gig was still enjoyable, if hardly stimulating and occasionally dull (when Martyn, augmented by electric back-up, failed to extract any inspiration from his musicians on several pieces of rifferama), is a measure of Martyn's talent rather than his personality.

At first glance, it would appear that John Martyn has been lying dormant over the past couple of years, considering that his last studio work was back in 1975 (in those glorious times when we had free festivals and punks were peculiarities who got sand kicked in their faces!). First glances, though, are invariably deceptive and you can rest assured that the dependable Martyn has been his usual busy and creative self. Granted, he disappeared to Jamaica for the best part of 1976 but, far from being a holiday, this venture can best be described as a 'sabbatical period' during which he spent some time playing with Burning Spear and was introduced to the legendary Reggae producer Lee Perry, with whom he worked for a while.

| Into the Trees.
@David_Lofts @bigmuffsite That's really great. You sing that really beautifully - I'm not often taken with other p… https://t.co/3uovZ520tI
1 week 3 days ago