Thirty three years have elapsed since the Old Grey Whistle Test performance that conferred a measure of stardom on John Martyn.

In the 1970s, John Martyn was the master of the romantic sublime. Schooled in the 1960s folk boom, this Glaswegian went electric, made the Echoplex tape-delay device his own, and found his musical soulmate in fellow closet jazznik double-bassist Danny Thompson. Tender intimacy and booming spaciousness all of a piece, Martyn's classic albums Bless The Weather, Solid Air and One World conjured acoustic-electric moodscapes where your heart and time itself stood still.

Exactly when it was that Martyn's vocal became a slurred growl with built-in elasticity is open to debate.

A cool and charismatic John Martyn and his band played to a theatre only half filled, with a jet black drape as a backdrop.

Just returned from the John Martyn gig at Róisin Dubh in Galway. 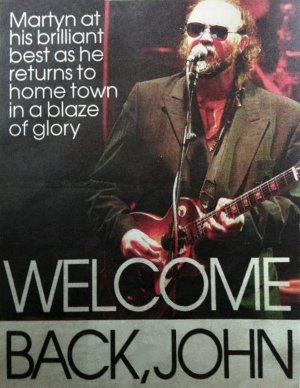 FOLK jazz maestro John Martyn made a triumphant return to his home town despite the effects of serious surgery.

Bigger and gruffer than ever

JOHN Martyn, arguably Scotland's most respected singer-songwriter, has played the musical equivalent of steady darts throughout his career, while continuing to attract new fans to his understated brand of Celtic soul. Consequently, last night's audience represented a broad church, who were politely receptive to his support act, a mousey young minstrel called Eva Abraham, who has obviously heard a Joni Mitchell album or ten in her time.

If John Martyn hadn't become a folk/blues/rock legend, he could have knocked out a career as a mimic. At one point, he perfectly impersonates Alf Garnett. At another, he adopts the voice of what can only be described as a northern-English, butch but camp transvestite.

"IT'S only an A chord," John Martyn protested, somewhat embarrassed as yet another wave of encouraging whistles and cheers greeted even his pre-song noodlings on the guitar.

John Martyn picked up his guitar, played a solo that got everyone hooked and held them spellbound all night when he played the Roisin Dubh on Monday February 26.

| rab zappa
@JjjVinyl @bigmuffsite oh well I do still have a couple of copies after all..
5 days 18 hours ago

| Elliott Franks
John Martyn live at The Anvil in Basingstoke on the 27th April 2004 mad to think this was 16 years ago… https://t.co/fmbKEx3uCY
1 week 4 days ago