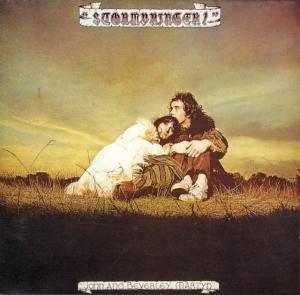 JOHN AND BEVERLEY MARTYN: Stormbringer - Go Out And Get It; Can't Get The One I Want; Stormbringer; Sweet Honesty; Woodstock; John The Baptist; The Ocean; Traffic-Light Lady; Tomorrow Time; Would You believe Me? (Island ILPS 9113)

STORMBRINGER has not been conceived in the folk idiom nor does it bear much resemblance to anything John has done in the past. But when a young folk singer leaves such a strong mark on the scene during the transitional stage, and his talents continue to blossom in natural progressions, who can decide exactly when the conversion from one tag to another takes place? And anyway, who cares?

John wrote six of the numbers and his wife Beverley the other four. Last summer they went to the States where producer Joe Boyd set up the best sessionmen available: Paul Harris, Levon Helm (The Band), Billy Mundi (Mothers) and Harvey Brooks (Electric Flag) bore witness and assisted in the creation.

The fusion has proved for the first time that excellent British songs need not fall on stony ground given the right exploitation. John and Joe Boyd knew exactly how to keep it cool, natural and acoustic.

But don't try and make a special effort to dig it because it won't work. Stormbringer is a relaxing agent which acts like a drug. If John and Bev turn you on they leave a lasting impression; you first become high on the arrangements, then the nature and quality of the songs become addictive and songs like Sweet Honesty and Stormbringer bore their way into you; but they take time to sink in, so give them a chance. Ahead of its time? Who knows - time loses all meaning and relevance when Stormbringer is on the turntable. - J.G.

sitenotes:
This review was published in Melody Maker of 7th March 1970, in the LP supplement, page 21.
Picture kindly provided by John Neil Munro.

| James Barry
@OneWorldJM Hi, I was sure I remembered seeing JM at the Theatre Royal, Bath but could find no date in the concerts… https://t.co/Vo0ewtPGFj
1 week 3 days ago

| One World
Small change in name of the website again https://t.co/UVWX5NLsIy
1 week 4 days ago

| One World
Heads up | Summer Gathering https://t.co/oNFUjz01Ha
1 month 1 week ago

| Paul Hillery
@bigmuffsite found this but didn't see it on your concert list https://t.co/NurVAf1AVs
2 months 2 weeks ago
END_OF_DOCUMENT_TOKEN_TO_BE_REPLACED