BECAUSE SO much of it hews close to the soulless soul shuffle of Compass Point, Sapphire could be mistaken for evidence of John Martyn coasting into the shallows of a career that looked irretrievably lost. But his return to Island has dropped him back into the liquid, gear-slipping mould of the old, magical Martyn. This is as finely-wrought as voyage as the tragic Grace And Danger.

The routine funk cycles which supported him through Well Kept Secret have been unchained; the music is cut loose from mere time-keeping. A song will loop around a melody line with discreet languor at one moment, with gripping urgency the next. The players are well-tempered and faceless, but their very skill stalls Martyn's most gushing outbursts - just as his coarsely forlorn singing skippers them like a crusty Ahab. The tension is played out over writing of fresh inspiration.

Sapphire itself would sound hopelessly mordant in another's hands. Here it is a precious thing, the most yearning of an old lover's yarns. In Acid Rain and a supremely acrimonious domestic tangle called Mad Dog Days, the vocal rakes and scrapes at different kinds of wound; but it's the same sound which invites jubilation in Coming In On Time, a chiming statement of faith.

Sapphire finds John Martyn reflecting on most of the avenues he's been down. Fisherman's Dream dips back to his oldest folk days, and to provide a translucent arrangement of Over The Rainbow is to present a sequel to his Singing In The Rain, 13 years after it appeared on Bless The Weather. Some of the songs are a little ordinary, and maybe we forgive John's indulgences too easily. But this is very like welcoming home an old friend, a companion who -like Hammill, perhaps- can play the unselfconscious lover we always wanted to be. The best parts of Sapphire shine very bright. 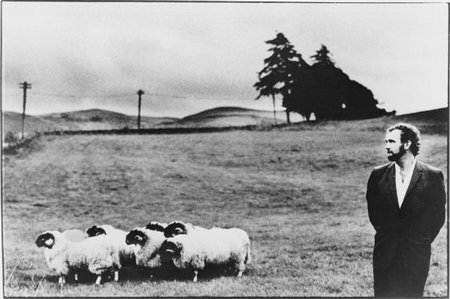 sitenotes:
1 Carnaby Street is where the NME office was located at the time.
This review was published in the Long Players section of NME, 10 November 1984.
Material provided by John Neil Munro.
Related to:
Sapphire