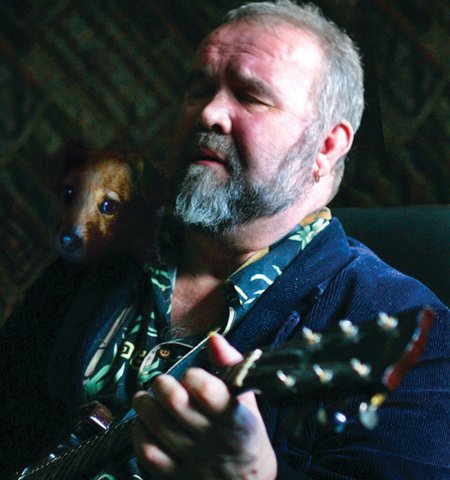 John Martyn
and peculiar
'shoulder ferret'
Graceless Favour
A new John Martyn film is well intentioned and clearly created with love - but falls short of the grand setting he deserves
John Martyn: One World... One John

UNTIL HIS DEATH FROM PNEUMONIA in 2009, John Martyn was one of our most fiery and idiosyncratic artists. Over four decades he fused blues. jazz, folk and electronica to give us albums such as his 1968 debut London Conversation, 1973's seminal Solid Air -its title track a tribute to close friend Nick Drake- and 2004's On The Cobbles, a glorious return to his acoustic beginnings.

Although he began as a folkie, emerging from the same milieu as Bert Jansch, Ralph McTell and Al Stewart, along the way his sound was morphed and moulded by a variety of sources - from the fuzzbox and the Echoplex he used to distort his guitar to the influence of Lee 'Scratch' Perry, jazz bassist Danny Thompson, saxophonist Pharoah Sanders, and his first wife, Beverley Kutner.

His work was also fed by the pitch and trough of his personal life: from booze and drugs and general hell-raising, to the failure of two marriages, drunkenly impaling himself on a fence, and the amputation of his right leg. As he once put it, with considerable understatement: "I've never been the morris-dancing type."

He was, then, a difficult man to capture - possessing the kind of spriteish creativity, not to mention the liquor-fuelled truculence, that might make a man elusive. Yet in One World... One John, Lyn and Eleanor McMullan boldly attempt to distil the essence of Martyn, with a portrait that shows him as both man and musician.

The material here may be familiar to some - filmed in Scotland and Ireland between 1999 and 2001, it was originally released on VHS in 2001. Its re-release, in freshly edited form, was a decision made by both the McMullans and Martyn's estate in the wake of his death.

It seems intimate -homely setting, rehearsal footage- but ends up feeling like a series of YouTube tributes

In among 15 live performances - from May You Never to You Don't Know What Love Is and Cocaine Lil, we find plenty of rehearsal and interview footage. The general impression here is of a step towards intimacy - the interviews homely and informal, the rehearsal footage ad hoc, the performances largely recorded from the vantage-point of the stage. And over the duration of the documentary that sense of intimacy grows - one grows accustomed not only to the rhythm of the film but to the surprising font of the captions, and the Glaswegian burble of Martyn's speech becomes more intelligible.

The problem, really, is that One World... One John can feel a little too intimate - a fact that is at odds with the stateliness of its intention. What could have been a thoughtful and well-measured portrait of a fascinating artist does not feel so much like a feature-length documentary as a series of YouTube tributes.

The structure is disorientating; the interviews with Martyn feel somewhat jolting - we seem to enter mid-conversation, with no real notion of context or theme, and little continuity. In the first he's talking about his mother; in the next, it's about his relationship with the guitar and the need for practice. Throughout, Martyn sits in a patterned armchair, in the corner of a room decorated with patterned wallpaper, next to a pair of patterned curtains, resplendent in a patterned shirt. It's not surprising that one should feel faintly dizzied by it all, nor that one should spend some time wondering why the top portion of his head remains forever out of frame. Most of all, though, one never feels madly enlightened by these interview excerpts, as if they are merely snippets of mildly interesting conversation overheard in a public house.

The musical portions are well shot, so that it is possible to feel wrapped up in the closeness of the music itself, though of course the performances and rehearsals are limited to a single period in Martyn's career, so one has little sense of his evolution as an artist, or his influence as a musician.

One World... One John is an obvious labour of love for its makers, and there is a real warmth and honesty to every inch of it. Therefore for Martyn devotees and completists it will naturally make a welcome addition to a collection. But others may find that this film, however affectionate, somehow lacks the magic that Martyn's music possessed, and mourn the missed opportunity to give a great artist a grander setting.

sitenote:
The interview was published on page 90. Phill Savidge made me aware of the existence of the article.