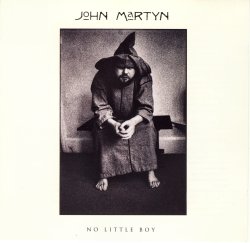 December 6, 1993 - The progressive rock stations of the late 1960s were good to Scottish guitarist John Martyn. Since that time, he's been known primarily to other guitar players, having faded from the airwaves. If Martyn is known beyond the world of musicians, it's for his song "May You Never," which was recorded by Eric Clapton. Now, Martyn is making something of a comeback by reviving his own sound.

On his new recording, No Little Boy, Martyn revisits the songs he's written over the past 25 years, many of which he's also recorded in folk and electric versions. These new renditions, he says, are definitive.

"All the versions have changed from their originals," Martyn says. "Strangely enough, I listened to London Conversation, the very first album I ever made, the other day, and it didn't sound that bad to me."

Below is the radio item treating the same subject in a more elaborate way. There are some quotes from John and from his former producer Joe Boyd.

Related to:
No Little Boy

| Paul Hillery
@bigmuffsite found this but didn't see it on your concert list https://t.co/NurVAf1AVs
2 months 2 weeks ago
END_OF_DOCUMENT_TOKEN_TO_BE_REPLACED