A Smooth Scotch Blend of Folk and Jazz

In the late 1960s it was a novel, far-reaching idea when folk-rooted guitarists in the United States and England began toying with the harmonies and syncopations of jazz. (Now such hybrids are taken for granted in the music of Norah Jones or Grizzly Bear.) One of the most idiosyncratic British innovators, the 60-year-old Scottish guitarist, singer and songwriter John Martyn, made his first New York appearance in more than a decade with a brief yet heartening set at Joe’s Pub on Thursday night. He was accompanied by a frequent collaborator: Danny Thompson, the bassist best known as a member of Pentangle. 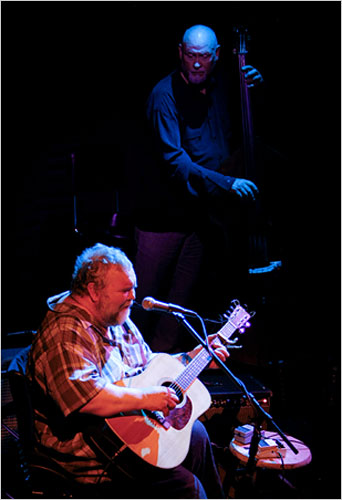 Mr. Martyn’s style, which has lately been revived by the college-radio favorite José González, mingles the modes of traditional Celtic songs, jazz chords, rural-blues fingerpicking, the otherworldly singing of Billie Holiday and the bluesman Skip James, a fondness for electronics like the Echoplex and, from the 1970s on, a touch of reggae. In his music, steady, precise, tightly wound yet eccentric guitar vamps —with chords and single notes ricocheting from off-beats— support waywardly improvisational vocals that are crooned with honeyed introspection or burred with a rasp.

Mr. Martyn’s own songs, among them May You Never (which Eric Clapton also recorded), juxtapose benevolent wishes with an awareness of darkness. Although he has made albums since 1967, releasing his most recent studio effort in 2004, Mr. Martyn’s Solid Air, from 1973, was his indelible moment in British rock: meditative and earthy, pensive and luminous. Mr. Thompson also played on that album, which supplied most of the set’s songs.

Mr. Martyn performed in a wheelchair. Infection from an injury led to the amputation of his right leg below the knee in 2004, and one reason he was visiting New York was to get a new prosthesis. He joked, gruffly, that he is now a "living leg end," and at times he seemed to be in pain.

But when he played, his music was intact. He picked taut, spiraling triplets in The Easy Blues, stretched and teased the vocal phrases of May You Never and Solid Air toward abstraction, and played hide-and-seek with the beat amid the Echoplexed layers of Big Muff.

Mr. Thompson was a full partner. He pinned down the harmonies, slipped contrapuntal lines into the spaces between guitar chords, answered and prodded Mr. Martyn’s voice. He brought something like a Bo Diddley beat to Skip James’s I’d Rather Be the Devil, while Mr. Martyn topped echoing guitar chords with lead lines that darted toward polytonality. The songs reached inward, becoming mantras of sorrow and hope, reflection and longing, acknowledging but not yielding to the toll of the years.

sitenotes:
This article appeared in print on October 11, 2008, on page C3 of the New York edition.

| Paul Hillery
@bigmuffsite found this but didn't see it on your concert list https://t.co/NurVAf1AVs
6 months 3 weeks ago
END_OF_DOCUMENT_TOKEN_TO_BE_REPLACED