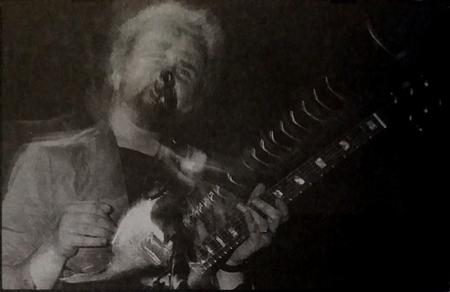 I SOMEHOW lost track of John Martyn's recorded progress round One World so, with news of the excellence of his new album ringing in my ears, this was to have been a re-induction. Nothing, however, happened here to make me feel I had missed anything of great import. What once had constituted a great adventure from wispy, shady paths to the centre of the maelström, now seems a somewhat forced trek through the booming empty darklands.

Things didn't go well from the start with the dreadful acoustics making the re-worked Don't Want To Know sound messy and unfocused: Martyn's unique guitar phrases bouncing around, but never off, accomplice Paterson's synth-burbles. Not a pretty noise, not even an effectively cacophonous one. Root Love, from the neglected Sunday's Child collection, began promisingly but something nagged and my mind wandered, and wondered if things would settle down.

Lowpoint of the evening was the lacklustre Johnny Too Bad, barely shifting along as the guitar and synthesiser combined to produce an ugly, relentless sound that just went on and on - this was the man who played guitar on Burning Spear's Man In The Hills?1

Tonight's highlights were the whimsical renditions of Over The Rainbow and Singing In The Rain — get the picture? The audience lapped it up but he's always had a blindly loyal following. He used to shake them up from time to time but, this time round, 'that certain surprise' was just another damp squib.

- Sean O'Hagan
sitenotes:
1 In general this project is not ranked among John's greatest achievements.
This review was published in NME of 8 December 1984. There were two consecutive shows in the Dominion, 14 and 15 November.
Material provided by John Neil Munro.
Related to:
Sapphire