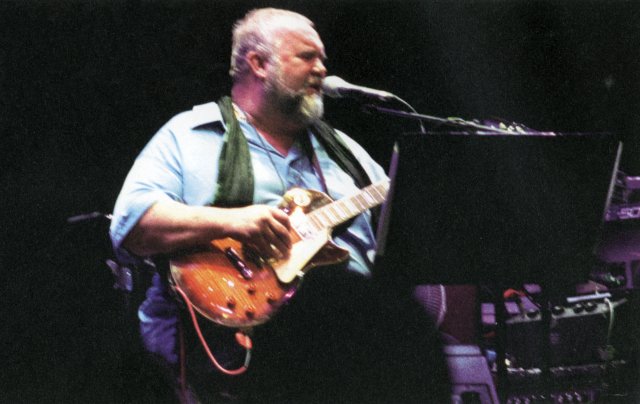 You can never go back. But still we try to recapture something we were too young -or not yet alive- to witness in the first place. That's the idea behind Don't Look Back, the series of concerts where artists perform their 'classic' albums. And what it basically says is, "We still like you, but back then you rocked my world so could you please make me feel like I'm 16 again?" But, you could argue, I've moved on since then, so why can't you?

When the jazz folk legend that is John Martyn is wheeled onto the stage of The Barbican to perform his beautiful 1973 recording Solid Air he manages to get the Don't Look Back concept fabulously wrong and, therefore, absolutely right. Because the man don't give a fuck. This is his most high profile -some would say prestigious- performance in over 20 years and what does he do?

The one-legged Pete Doherty of folk rock goes completely jazz-funk on us. For what seems like hours we are treated to endless bass solos, saxophone bursts straight out of a late Eighties Billy Joel video and laid back bluesy guitar musings by the Scottish bard himself. Until it all goes quiet. Martyn swaps to his acoustic guitar, the bass player (surely an ex-member of Sting's band) straps on a mandolin and they do Over The Hill, the opening track from Solid Air. For a moment I change my mind. Maybe you actually can go back?

Right after it, Martyn asks us if, "The other guys played the songs in the same order as on the albums". Well, anyway, he ain't going to. And it suits him well, not only for purely technical reasons. Mainly just because he feels like it. And it is, after all, his birthday, so on the slick fusion solos go.

But somehow, slowly and painfully, it starts to make sense. When he ends the evening with Johnny Ace's Never Let Me Go and sings it in his wounded grizzly falsetto there's no hints left of the soft fusion that led up to this moment.

Still, as much I don't like myself thinking this, I'll probably be back for next year's Don't Look Back. That is, if they convince Kevin Rowland to sing My Beauty and R Kelly finally performs the whole of Loveland, the unreleased masterpiece that is already the Smile of modern r'n'b.

sitenote:
The review was published in issue #15 on page 56.

| rab zappa
@JjjVinyl @bigmuffsite oh well I do still have a couple of copies after all..
2 days 16 hours ago

| Elliott Franks
John Martyn live at The Anvil in Basingstoke on the 27th April 2004 mad to think this was 16 years ago… https://t.co/fmbKEx3uCY
1 week 1 day ago