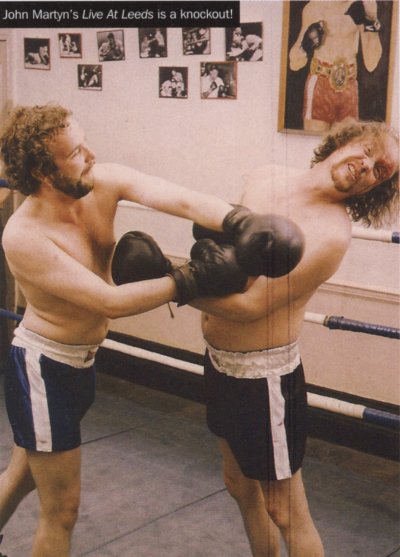 Live At Leeds may unsettle latter-day fans of John Martyn who have belatedly discovered the great man via the tasteful posthumous compilation.

Between songs here, he profusely effs and furthermore blinds; he giggles, shouts and taunts his compatriots (double bassist Danny Thompson and drummer John Stevens) with boisterous, rather edgy good humour. Then, as each song begins, he throws his head back and snaps into such a deep trance that it's as though a comprehensively contrasting persona has possessed him wholesale. A more illustrative example of Martyn's legendary duality is hard to imagine: the raucous, pugnacious pub-goer butting heads with the tender, spiritual poet.

Since its original below-the-radar issue in 1975 -a limited run of 10,000 copies, sold by mail order from Martyn's own house- Live At Leeds has grown a Parental Advisory sticker and a bonus disc of extra tracks cribbed from the performance(s) and afternoon rehearsal. The result is a fully-rounded picture of Martyn's extremes: not just his mercurial temperament, but also the insatiable artistic impulse which leads him from the experimental Echoplex waves of Outside In to the rustic dignity of Spencer The Rover. A pellucid reading of the gorgeous Head & Heart justifies the bonus disc in itself.

| Into the Trees.
@David_Lofts @bigmuffsite That's really great. You sing that really beautifully - I'm not often taken with other p… https://t.co/3uovZ520tI
1 week 2 days ago