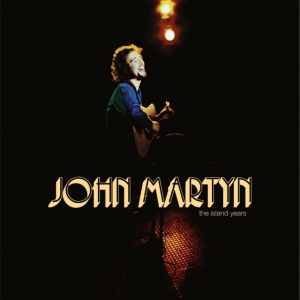 It's more than a little ironic that this sumptuous box celebrating Martyn's lengthy tenure at Island should include the first official appearance of the album that brought about the end of his relationship with the company. The Apprentice was delivered in 1987, but label boss Chris Blackwell vetoed its release, feeling it wasn't the right step for Martyn's career at the time.1

After 20 years of being left to his own devices, indicative of the label's admirably hands-off policy that allowed contemporaries such as Fairport Convention, Richard Thompson and Nick Drake to map their own creative paths, Martyn saw the unexpected and unwanted interference as a signal to move on, so opted not to renew his Island contract. Quite what was wrong with The Apprentice (a version of which John released independently three years later,2 funding new recordings himself) is baffling, as it's clearly cut from the same cloth as its immediate predecessors: a stylish collection of erudite songs awash with folk, jazz and soul flourishes, albeit occasionally hamstrung by overly synthetic production.

This isn't the first time Martyn's received the box set treatment, but whereas 2009's four-disc Ain't No Saint (which the singer himself was involved with,3 and released just five months before his death) cherry-picked the highlights of a 40-year career, bolstered by a couple of dozen previously unreleased tracks, these 17 discs comprise every Island studio album, each with generous extras, plus standalone discs of genuine historical worth.

Prominent among these is Live At The Hanging Lamp, an extraordinary one-man show from 1972, recorded at the long-established folk club based in the crypt of a Richmond church. Intimate acoustic takes on the likes of Bless The Weather and May You Never, and a delicate reading of Dylan's Don't Think Twice, It's Alright, are followed by a fiery I'd Rather Be The Devil, on which Martyn introduces the Echoplex effects pedal that would soon become a signature sound on his studio output.

Another previously unreleased live show, recorded in Sydney in 1977 for broadcast on Australian radio, finds Martyn in the form of his life, rugged and bluesy on One Day Without You, tender and persuasive on My Baby Girl. Studio outtakes also play a part in the overall undeniable glory of this set, not least a sprightly cover of the R&B standard Hi-Heel Sneakers, dating from the 1980 sessions for Grace And Danger.

In the not-too distant days when record shops were a familiar sight on high streets, Martyn's music could be found in the racks marked 'folk', but that was always more of a convenient catchall than a true description of the breath-taking scope of styles John explored. From the tentative strums of London Conversation and The Tumbler, to the seminal Solid Air, the riches of Sunday's Child and Grace And Danger, here is a musician whose innate curiosity and refusal to be categorised is backed up by exemplary craftsmanship coupled with the mind and heart of a poet.
Terry Staunton

sitenotes:
1 John told the BBC at the time that it was Clive Banks who didn't like the material.
2 It was released by Permanent Records, and independent record company owned by John Lennard. However, John told BBC's Nicky Campbell that "it's on Permanent Records, my very own record label". Not that he owned the label, "it's just it was formed for me."
3 Only just. When Ain't No Saint was released, John told Staunton that he had "not been too involved in the selection process", giving credits to John Hillarby.
Related to:
The Island Years [box set]