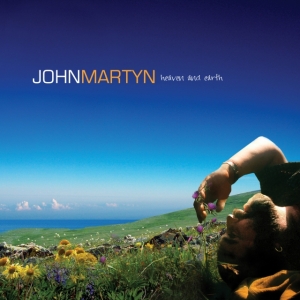 It is a wee bit bizarre that what is British singer/songwriter/guitarist John Martyn's final studio album begins with him singing "Don't make me laugh, I might die laughing." That song, Heel Of The Hunt, also features Phil Collins singing1 a spectral-like refrain that calls for the singer to "Be at peace now." Martyn, who passed away in January 2009 due to complications from double pneumonia, may well have had reason to both laugh and be at peace, as Heaven And Earth is quite possibly his most commercially viable album in years. On it, he is backed by the core of his long-time electric touring band, which included bassist Alan Thomson and keyboard player Spencer Cozens. The album also includes guest spots by such luminaries as Garth Hudson and Jim Weider (of The Band) and the aforementioned Genesis drummer and singer, who also contributed the song Can't Turn Back The Years.

Martyn in his later years had developed a mighty Waits/Beefheart-inspired growl, which he used as a powerful baritone sax-style instrument to augment his usual smooth tenor. The funky Stand Amazed is heightened by Hudson's sinuous accordion, and Cheryl Wilson's gospel-inspired backing vocal arrangements. The title track is Martyn at his cool jazzy best, and it would not have sounded out of place on Grace And Danger. Bad Company is one of the album's two high points, which present some final examples of Martyn's trademark fiery fretboard work.

While there are no songs on this CD that compare to his early masterworks such Solid Air, Bless the Weather, or One Day Without You, these new songs show an artist who still had much to contribute. The slow burning Gambler and the bluesy, life affirming Colour are fine examples of Martyn's still potent creative powers.

Years of hard living and hard drinking led to Martyn losing a leg in 2003 and going into semi-retirement, where he stopped touring all together. His journey back is chronicled and fictionalized in the eight-minute-plus album closer Willing To Work. Tickled ivories, moaning organ, down-in-the-pocket fretless bass and drums, soulful backing vocals, and soaring sax support Martyn's own scatted, improvised vocal acrobatics, before he cuts loose on some electrical, feedback-drenched guitar. All things considered, it's not a bad note to go out on.

There was only one, and will ever be one only John Martyn. No more will we be able to go to a live show and hear the pain-defying howl of his swampy echoplex guitar, or marvel to a voice that could go from a sound as smooth as fine single malt to a bone shaking primordial howl. No more will we be able to laugh at the outrageousness of his humor or be stopped dead in our tracks by the humanity of his lyrics. I for one will miss you, brother John.

sitenotes:
1 I have the strong impression that we are hearing John himself on the overdub. Phil Collins sings on Can't Turn Back The Years allright.
Lahri Bond kindly gave permission to use his review on this site: "Keep the flame burning, we all miss John terribly."
Do check out the Driftwood website. And the other article Lahri wrote back in 1992 for Dirty Linen.

| Paul Hillery
@bigmuffsite found this but didn't see it on your concert list https://t.co/NurVAf1AVs
10 months 3 weeks ago
END_OF_DOCUMENT_TOKEN_TO_BE_REPLACED