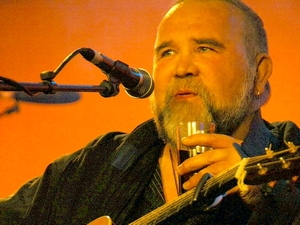 It's a nice idea, to go back to roots and search out the acoustic fledgling days of John Martyn and all that followed. All the more so, given that renewed interest from younger listeners is more likely to hone in on the early albums, if they don't just go bald-headed for Solid Air and leave it at that.

At least with this two-disc anthology set, new fans can trace the man from 1967 beginnings, two fine songs from Martyn's debut album London Conversation, the title track itself and Fairy Tale Lullaby. The compiler should have also included Back to Stay from that debut album, surely far superior to the other bits and bobs included here, like the very average songs In the Evening, When Its Dark, Working it Out and All For the Love of You. Martyn didn't sing these in concert, nor, indeed were they requested, signs on it. Curiosity value alone is not a good enough reason for including curiosities. One suspects too that he thought little of them.

The noodly guitar-picking exercise, Seven Black Roses is joined here by the equally unremarkable instrumental, A Day at the Sea. There is an under-par alternate version of John the Baptist, and an alternate take of Go Down Easy, both of which distract from the value of the definitive versions.

In other words, producers usually make the correct decision on the day about what's left in for pressing and what makes the cutting room floor. There is a reason in the end why out-takes, alternate versions and demos end up being found by accident during clear-outs as happened in the case of three tracks here.

The hugely-gifted Martyn sadly left us at the age of 60 in early 2009. He would have been better served by leaving some of this material out, although this may in the end be down to personal taste. It should be said that some great essentials are here also, to wit, album versions of the wistful Parcels, with its astute use of double-tracked vocals; the hippie-gentle Head and Heart itself, Go Easy and Woodstock; the enigmatic allure of Tree Green and the spacey, trippy Solid Air.

Much of the later work is top heavy with elaborate arrangements, and brilliant music though it may be, any new younger fans are likely to be attracted to the integral, rootsy Martyn without the frills. By 'the frills', I mean the later albums, characterised by the luscious keyboards of Spencer Cozens, the saxes of Martin Winning and the late Gerry Underwood, the baroque fretless bass of Alan Thomson, Jim Lampi and his Chapman Stick, the hugely inventive drumming of Arran Ahmun, input from Phil Collins on two great albums, other collaborators.

There is one song at the conclusion from the later Martyn repertoire, a live version from 1987 of Martyn's interpretation of Foster Paterson's song, Patterns in the Rain, accompanied solely on piano. Recorded at Island Records 20th anniversary birthday party, it is lovely, plain and simple.

Related to:
Head and Heart | The Acoustic John Martyn (2CD)

| Paul Hillery
@bigmuffsite found this but didn't see it on your concert list https://t.co/NurVAf1AVs
10 months 3 weeks ago
END_OF_DOCUMENT_TOKEN_TO_BE_REPLACED