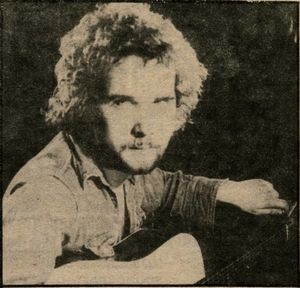 JOHN MARTYN is unlikely to ever sell out a concert at the Albert Hall at six quid a seat, and one couldn't really envisage him entertaining the daughter of an American President backstage after a gig at Madison Square Gardens. He's far removed from the kind of social milieu inhabited by the more facile stars of the moment.

Martyn's continually inventive music reflects an honesty one would be hard put to find in the works of ... well, as someone once said, there's really no need to name them. His concert last Friday at Surrey University1 confirmed, once again, Martyn's individuality and the brilliance of his fellow musicians, bassist Danny Thompson and drummer John Stevens.

The subtle aggression of Thompson's bass, precise and stinging beneath the levels of sound created by Martyn's voice and guitar, was beautifully controlled on May You Never and Bless The Weather. The extraordinary range of Martyn's voice embellished Spencer The Rover with a hallucinatory edge, emphasised by the shimmering textures of the guitar, and always Thompson's bass stabbing at corners.

Both are relentlessly imaginative, forever creating new musical patterns, with each successive number becoming more and more intricate. Discover The Lover featured Martyn's most expressive vocal performance of the evening, and it may be the best song he's written. It's certainly one of the most moving love songs this side of Another Day.2

John Martyn may not have three thousand tons of sound and lighting equipment and there wasn't a laser beam in sight, but he's still one of the most impressive artists currently working in rock. - ALLAN JONES

sitenotes:
1 This places the concert at Guildford, 16 May 1975. Wizz Jones was the supporting act.
2 Jones is probably referring to Paul McCartney's first solo single, written 1970 in New York for Ram and released 19 February 1971 in the UK.
This review was printed in Melody Maker of 24 May 1975, in the live section 'Caught in the Act'.

"Due to my hard and uncompromising nature, I never do requests unless I'm asked."

| Elliott Franks
John Martyn live at The Anvil in Basingstoke on the 27th April 2004 mad to think this was 16 years ago… https://t.co/fmbKEx3uCY
2 days 9 hours ago