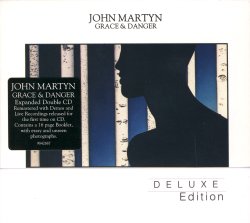 The collapse of a marriage (or two) has proven to be creatively satisfying for the likes of Abba, Fleetwood Mac and Marvin Gaye, but few accounts of love-gone-wrong come anywhere close to the emotional impact of Martyn's 1980 release, notoriously shelved by Island for a year, because label boss Chris Blackwell found it too nakedly honest and upsetting. Countless previous albums had revealed Martyn a hugely affecting singer and writer, able to pinpoint the troubles of the heart with unflinching accuracy. But the fact that Grace & Danger was, to borrow a phrase from the movies, based on a true story, made it all the more powerful.

Some People Are Crazy and Hurt In Your Heart have taken on an 'our song' status for hundreds of estranged couples, with Martyn articulating human desolation with and amazing, painful relentlessness. It's all delicately played by an understated and tight musical group that includes drummer Phil Collins (himself no stranger to the high-profile break-up), with a second disc of early demos and outtakes to compound to the sob quotient. The saddest album ever made? Perhaps. But it's also one of the most beautiful you're likely to hear.
Terry Staunton

sitenotes:
This review was published in Record Collector of February 2007. The issue had Johnny Cash on the cover.
Related to:
Grace & Danger Deluxe Edition

| Into the Trees.
@David_Lofts @bigmuffsite That's really great. You sing that really beautifully - I'm not often taken with other p… https://t.co/3uovZ520tI
3 days 17 hours ago

| Into the Trees.
@David_Lofts @bigmuffsite You lucky lucky man. Where did you get to do that and are you doing it again?
4 days 15 hours ago
END_OF_DOCUMENT_TOKEN_TO_BE_REPLACED