JOHN MARTYN picked up his guitar, played a solo that got everyone hooked and held them spellbound all night when he played the Roisin Dubh on Monday February 26. 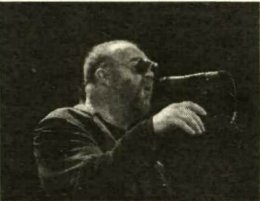 Róisin's was jammed with people waiting to see John Martyn. The singer has been going strong since he released his first album London Conversation in 1968, so I expected the audience to be made up of people his own age. Instead the vast majority of the crowd were in their 20s and 30s. In a way, that's even belter for Martyn since it shows that he's still gaining new fans and reaching new audiences.

He kicked off the gig with a version of Man In The Station from his classic Solid Air album. However this version was different. It was longer, the guitar was more 'up-front', and Martyn allowed himself the space to let his fingers fly over the fret-boards in a blaze of solos throughout.

True you wouldn't have known it was Man In The Station until he started to sing, but that made for a better experience. (He did the same later on with a super-relaxed version of Don't Want To Know.) I mean we listen to the album version at home, so why should we hear a note-for-note rendition at the gig? Martyn made a good choice of playing around the song, extending its boundaries, and letting it take on a new lease of life. This versatility alone showed what a perfect vehicle his music is for re-interpretation. In short, his songs never lose their freshness.

If there was one thing about the gig it was that Martyn can certainly solo. We're all familiar with his innovative style of acoustic folk playing, but on electric he's just as exciting.

Often solos, however well intentioned can be self-indulgent and go on too long, but not here. Martyn knows the key to a good audience grabbing solo is melody. You should be able to hum it, while still asking 'How did he do that?'. The lyrical, almost meditative nature of his solos, which still jumped with life and excitement put you in mind of Pink Floyd's David Gilmour, with whom his style has a lot in common. It was great to sec someone let rip on the guitar for a change.

Martyn's voice is an unusual instrument, that full and heavy Scottish accent lending a soulful, Isaac Hayes meets Louis Armstrong vibe to the proceedings. The passion of the voice was accentuated by the intimate surroundings of the Róisin's. Sometimes it became as powerful an instrument as his guitar, especially on the emotive Baby Please Don't Go, where Martyn wrenched every last drop of emotion to get him through the song. So much so that he nearly seemed to be crying. But he wasn't, he was just getting into the mood of the song. Indeed the overall mood was happiness. Standing there with his guitar and band, Martyn had a big friendly smile all evening. You just knew to look at him that he was enjoying himself and that there is nowhere else he wanted to be and nothing else he wanted to do.

People were shouting for Stormbringer and May You Never but to no avail. Maybe they asked too often. One man shouted, and only once for Jack The Lad and he got his wish. What a song! With its instant beat and chirpy keyboards, it sets the feets tappin' and the heads bobbing. Ah, if only all pop music could be like this.

After this the band settled into some heavy metal and for the encore, some slow, late night blues. That's John Martyn, versatile, different, and always a surprise. The audience thought so, they gave him a standing ovation. KA

sitenote:
This review was published in the Galway Advertiser of 1 March 2001. John got a favourable reception in this town, also demonstrated by this announcement for the August 1999 shows:

John Martyn, that soulful bluesy singer with that tender gravel-based voice that can bring tears from even the toughest hearts, is back in Galway for two shows next Monday August 30 and Tuesday 31. His concerts always seem to attract controversy, he is either in brillant form or he can be just a bit unreliable. Luckily Galway audiences have been much luckier than his fans elsewhere, seemingly he likes playing Galway and makes sure he is in top shape for the show, he has openly admitting himself that his best shows in the last five years have all been in Galway. Galway audiences seem to be able to get the best out of this enigmatic songwriter who has tortured his body over the last thirty years with alcohol abuse and worse but allways coming up with class albums. If you have not yet heard him grab your ticket now.

| rab zappa
@KTJBPodcast @bigmuffsite @kylegordon101 @Louie4711 This put me in the mood for Sunday's Child..
1 week 3 days ago