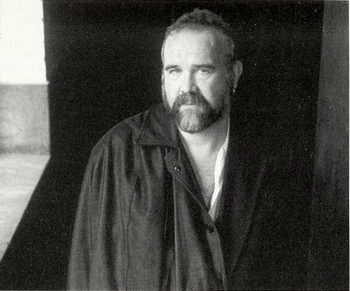 At Edinburgh's packed Liquid Room, he shuffled onstage (he's recovering from an injury) with his band and proceeded to show us that, live, he's still producing some of the most emotionally drenched music around; whether it's self-penned or, like Julie London's Cry Me A River, put through the Martyn process of moody mumbles, slowly swung and slurred. In physical appearance, the early cherubic Martyn and the more mature wild romantic of Bless The Weather days have long given way, through the music-biz clichés of substance abuse, marital problems and alcoholic over-indulgence, to that of a bloated middle-aged rocker, wired to the moon, stumbling through a performance and, literally, falling off stage. Well, yes, he's been there -with his mucker, jazz bassist Danny Thompson, he co-wrote the book about bad behaviour- but the boy has cleaned up his act. Not to the point of squeakiness, you understand; but as his fans (and they're all ages) at the Edinburgh gig saw, and heard, among the surreal and sometimes unprintable gags, Martyn led a band that was as tight as Gordon Brown, while he himself, electric guitar slung over his Bavarian girth, seemed almost graceful. He certainly laid down some impeccable grooves -not for nothing is he regarded as one of the fathers of trip hop- with a superb, relaxed, precise band who all deserve a name check: the rhythm section of Arran Ahmun, drums and percussion and John Giblin, fretless bass, were as firm but fluid as, ah, solid air; Spencer Cozens kept his cool under a silly hat as he handled keys and sequences and Jim Lampi was outrageously brilliant and self-effacing on the Chapman Stick (electric fretboard, like a bodiless guitar but with many more strings). No, they didn't reprise May You Never, but focused on superb tracks like Field Of Play and So Sweet from the new album, throwing in some of his huge back catalogue, the odd blues, and even encoring with Portishead's Glory Box.

Blurring borders has always been Martyn's stock-in-trade, and if his voice moved from sweet inchoate spiritual plea, to bitter, coruscating Celtic complaint, his articulate guitar spoke as widely. And all that with a dislocated shoulder too. (Norman Chalmers)

sitenotes:
1 Actually Norman wrote Glasgow Walking.
This review was published in The List issue 390 of 6 July, 2000.

| Into the Trees.
@David_Lofts @bigmuffsite That's really great. You sing that really beautifully - I'm not often taken with other p… https://t.co/3uovZ520tI
3 days 19 hours ago

| Into the Trees.
@David_Lofts @bigmuffsite Fantastic. What a brilliant experience. Do you perform?
4 days 12 hours ago

| Into the Trees.
@David_Lofts @bigmuffsite You lucky lucky man. Where did you get to do that and are you doing it again?
4 days 17 hours ago
END_OF_DOCUMENT_TOKEN_TO_BE_REPLACED