[…] for the next day's gig I shall leave you in the capable hands of Ian MacDonald.

FROM THE first number of his set, May You Never, John Martyn made it perfectly clear that he occupies a position quite independent of today's status-seeking rock didacticism. John's concern is to remove anything that keeps him and his audience apart, and his approach, necessarily intimate, will never allow him to make it into the big league.

He and bassist Danny Thompson were in a very good mood, judging from the number of beer-bottles cracked during the evening and Martyn's manic giggling and hilarious Scottish accent impersonations. At one point he came to the edge of the stage to get a light from a member of the audience and bumped into the wire crash-barrier.
"What's this fucking wall here?"
"It's to protect the audience," offered Thompson, opening another bottle.

They then played an astonishing track from Martyn's forthcoming seventh album,1 John's ridiculous multi-tracked electronics convincing at least one member of the audience that he was miming to pre-recorded tapes. "Eh Jimmie - it's all live, ken?"

I really don't want to write about this gig. The New York Dolls look better in print, you see, but I'd rather go and hear John Martyn being human.

His lovely arrangement of Singing In The Rain was lovely. His powerful arrangement of I'd Rather Be The Devil was powerful. His fine, kicking picking on The Easy Blues was fine.

I don't care whether you like John Martyn or not, or want to go and hear him or not. I don't know about evil, I only want to know about love.

HAVING RECOVERED from the debacle on Tuesday evening […] 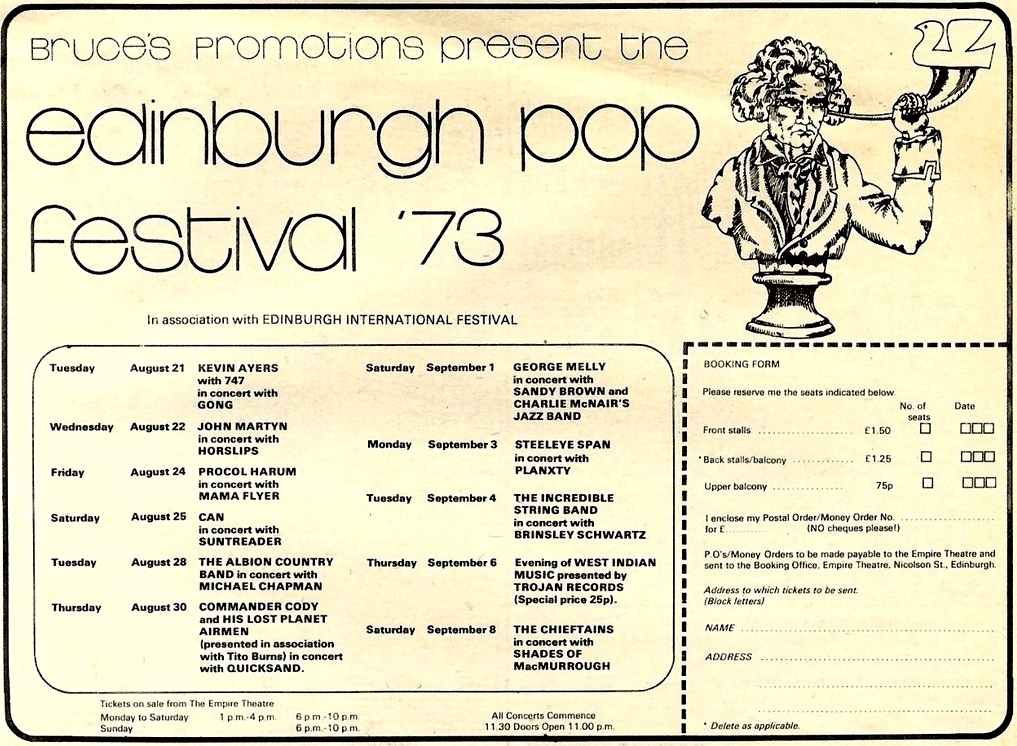 sitenotes:
1 Inside Out. The track referred to must be Outside In.
This review appeared on page 34 of the New Musical Express of 8th September 1973, as part of a much larger piece of all the Edinburg Pop Festival shows. The 1973 Edinburgh festival was the first one featuring rock music; they had booked ten acts of which John Martyn with Horslips were taking care of the second evening, on the Wednesday night. Other acts were Kevin Ayers with Gong, Procol Harum, Can, The Albion Country Band with Michael Chapman, Commander Cody with his Lost Planet Airmen, Steeleye Span, Planxty, The Incredible String Band, Brinsley Schwartz, and The Chieftains.
Material kindly provided by John Neil Munro.

Related to:
Inside Out

"Just think it's not as bad as it seems.... - probably worse."
(Talking about divorce)

| Paul Hillery
@bigmuffsite found this but didn't see it on your concert list https://t.co/NurVAf1AVs
10 months 3 weeks ago
END_OF_DOCUMENT_TOKEN_TO_BE_REPLACED