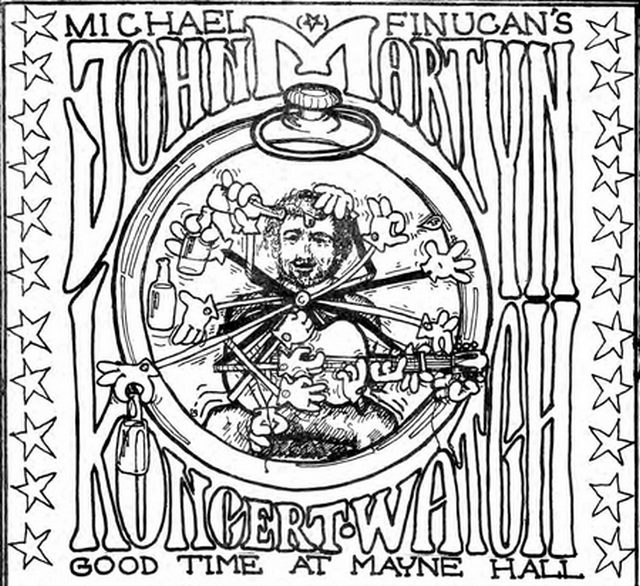 Few people see the ashes of total and utter chaos from which the phoenix that is a concert arises. On Sunday, 21st August I was privileged enough to witness this miracle. The concert was the Jansch / Martyn configuration with the local support of Dodsworth and Sullivan.

From bedlam on Sunday afternoon, John 'Organisation' Stanwell created order on Sunday evening (which is a big reduction on the long standing seven day record). Another damper plucked from the hot coals of disgrace.

I was pleased to see the crowds start gathering like blowies round yesterday's prawn-heads, surprising considering Martyn et al have less than superstar status in their ability to draw crowds.

Eventually, only 20 minutes or so late, the concert started with Dodsworth and Sullivan, a compatible duo from Canberra, who proved capable and very pleasant. The material used ranged from Australian Folk ballads to self composed songs, and while they were not greatly notable or exciting, their medium (that of the quiet acoustic ballad) has never really been prolific at producing magnetic performances. A good solid base for the concert to start, I thought.

After a short interval, the audience returned to not see Bert Jansch; he surfaced shortly after and came on quietly exuding casual cool. He picked up his guitar and asked the usual first-off questions artists ask the audience at concerts. As is par for the course with Brissie audiences he received no reply, so he sat there for a number of seconds until someone coughed at which point he said, "Ah, there is somebody out there after all". This was my first hint that Bert was not feeling real chirpy.

However one could not fault his guitar work - excellent technical playing. His voice was very good and well suited to his material. Yet nothing about him inspired me, he had a distinctly down (wet?) stage presence, a good technical performance, obvious introductions, basically an unemotional show of musicianship that came nowhere near winning me. Indeed he was making little attempt to win the audience. His last number, a blues song, was the only song that really impressed me. He put some feeling into that and it was the high point of his set.

John Martyn came on as unheralded as Jansch had, the difference being that there was a huge grin on his face, a distinct energetic spring in his step and he gave a joyous whoop to let everyone know - it was on! I couldn't help but smile at the huge grin on his face. He was magnificently stoned!

His first song was Outside In and he played it using the echoplex and tape loop linked to his acoustic guitar. Well a more impressive start you could not imagine. He was smiling quietly as he kept repeating the first bars and adjusting his equipment until finally he had it all ready. Now the adjusting had impressed me, but when he had finished he just seemed to settle in and really start playing. It is about here1 that words fail me. l only wish you had heard what Martyn could do with a guitar!

Basically he had a number of effects pedals - the echo, a wah-wah, a sustain, a reverb, an adjustable play head tape loop plus the effect that comes with an amp and more. These were used to varying extents, he would build up a most amazing wall of sound. A pulsating rhythm of repeated chords courtesy of the tape loop. A stunning wash of riffing being sustained and held even as the next chords were being produced, sound layer after sound layer. The most impressive build-up I have witnessed; the varying effects coming together to produce live, throbbing musical entity - each effect blending to add to what was already a stupefying sound experience.

And Martyn himself was passionately involved in the creation of this marvel - he strained, struggled, coaxed, wrenched and squeezed effects from his guitar, his feet pumping at the pedals. It was exhausting just to watch him. Outside In contains the two contrasting segments, the climactic one just described and then a quiet, introspective section (in which Martyn's voice is as important an instrument as his guitar); then the build-up and the inexorable peak of another effects section. It was during this that he broke a string on his guitar, he did not let that stop the song, he played through to the end.

This raises the second feature of John Martyn's performance - his handling of the audience. He just said he had to change a string and chatted ever so pleasantly and cheerfully while he did just that you couldn't help feeling easy and happy yourself. He was genuinely funny and he wanted he could damage a target severely with the least amount of effort, he lampooned various things not the least of which was the thanking the audience part of plastic performers acts.

Another point - John was so ripped and buoyed-up that he was not overjoyed at the idea of playing his quiet introspective numbers, hence a depreciating, excuse-like intro like "one from my hippie days". It would have been phenomenal if he could have played material of the energy and excitement of Outside In throughout his act and I must say some of the quieter numbers left me less than impressed. The introductions spoken by him were always good though, as long as you could pick up on his accent. The night was worth it for the power and majesty of the two songs he used in which he used his full barrage of effects, Outside In and I'd Rather Be The Devil. Both of which, particularly the intro to the latter showed how fully Martyn has explored the potential for varying sound, tone and quality from his guitar.

If those two songs were absolute winners, then comment must be made on the rest of the material. Some of it was not memorable, but Martyn's evergreens came up excellently. One Day Without You, May You Never, and Solid Air were all superbly rendered - needless to say Martyn's well lubricated voice was fabulous, you could say that JM plays the guitar and voice because the emphasis was not on tonal quality of singing. Martyn's variety of sound, his great stage atmosphere, material and voice made him come out head and shoulders above Jansch and a standout attraction.

All in all an excellent evening and ZZZ even made a little profit for our troubles. A big pat on the back to us, I say, and stay listening for the next king hit presentation from your ears best friends 4ZZZ-FM.

sitenotes:
1 Originally they printed 'hear' but that doesn't make sense.
4ZZZ (Four Triple Zed) is a community radio station based in Toowong, Brisbane. Michael Finucan presented the 5am morning show on weekdays. They published a magazine Radio Times and this unique Australian review was published in the issue of 1 September 1977.

"I don't mind being misinterpreted but I don't want to be misunderstood" (quoted by Jim Conley, 18 Nov 1973)

| Paul Hillery
@bigmuffsite found this but didn't see it on your concert list https://t.co/NurVAf1AVs
10 months 3 weeks ago
END_OF_DOCUMENT_TOKEN_TO_BE_REPLACED