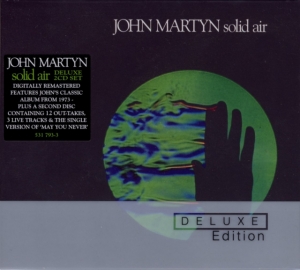 Worthy conclusion of remastering and expanding.

Compiled, with John Martyn's blessing, by John Hillarby from the official John Martyn website and with sleeve notes by Record Collector's Daryl Easlea, Martyn's landmark album from 1973 has now been digitally remastered and expanded into a two CD set. Disc One contains the original album, considered by many to be his best album, digitally remastered and sounding better than ever. Disc Two contains twelve previously unreleased out-takes, three live tracks and the 7" single version of May You Never.

The plastic slipcase contains a cardboard foldout double CD sleeve. Inside are two CDs printed with the original Island pink rim logos. The lyrics of May You Never and Solid Air are printed next to the CDs. Also included is a 20 page booklet with liner notes by John Hillarby and Daryl Easlea, the lyrics and some photo material.

Not all the lyrics have been included yet.

| Paul Hillery
@bigmuffsite found this but didn't see it on your concert list https://t.co/NurVAf1AVs
10 months 3 weeks ago
END_OF_DOCUMENT_TOKEN_TO_BE_REPLACED