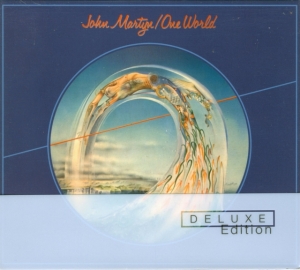 Remastered album with a bonus CD and a booklet.

The bonus CD contains unreleased live tracks and a lot of Another World material.

A well prepared release with nice artwork and booklet in slipcase.
One World was remastered and originally recorded at Woolwich Green Farm and Basing Street Studios, London.
The booklet contains extensive liner notes and the One World lyrics.

The first five tracks of the bonus CD are unreleased and recorded live at Regents Park in the summer of 1978.
The last ten tracks are presented as 'Studio Outtakes', they come from the unofficial and banned Another World release.
On the slipcase, Black Man At Your Shoulder is misspelled 'Black Man At The Shoulder'.

WARNING
The 2CD Box One World Deluxe should not be confused with the 2CD release One World by Artful/ PRISM which is in fact a reissue of the Classics sampler in the Avoidables section.

| Paul Hillery
@bigmuffsite found this but didn't see it on your concert list https://t.co/NurVAf1AVs
10 months 3 weeks ago
END_OF_DOCUMENT_TOKEN_TO_BE_REPLACED