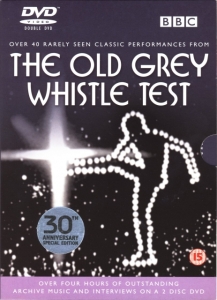 Over four hours of DVD to celebrate the thirty year anniversary of the BBC program.

The intros and the outros are not talked over and the commentary is different from the TV shows.

Back cover text:
The Old Grey Whistle Test was the UK's seminal live music show. When it was launched by the BBC in 1971 it was a unique platform for acts. During its run it featured performances from artists such as Elton John, Bob Marley, Lynyrd Skynyrd, Tim Buckley, Bill Withers and Curtis Mayfield to The Police, The Damned, The Ramones, U2 and REM.
To mark the 30th anniversary of the first show 45 outstanding performances from the wealth of the Whistle Test archive have been compiled on DVD, alongside 6 major interviews with John Lennon, Keith Richards, Robert Plant, Elton John and Bernie Taupin, Mick Jagger and Bruce Springsteen. Some of the recordings have not been seen since they were first broadcast and this DVD offers a rare opportunity to enjoy highlights of this legendary show once again.
Also included are the show's key presenters -Richard Williams, Bob Harris, Annie Nightingale, Mark Ellen, David Hepworth and Andy Kershaw- who share with us their reminiscences of the show, and an audio commentary by the show's founding producer Mike Appleton who takes us behind the scenes.

Liner notes:
It's Tuesday. Virtually any Tuesday in the 1970s. Homework's done, the kettle is on, the biscuit tin restocked. The doorbell rings and half a dozen friends shuffle into the hall. No time to exchange news, there's only one topic on the agenda for this weekly meeting. Tonight's edition of The Old Grey Whistle Test.
This ritual - with variations on the homework and coffee - was played out in households and halls of residence up and down the country, from 21st September 1971 for the rest of the decade.
The Old Grey Whistle Test was the essential showcase for non-mainstream acts and the only place - unless in the rare case of a documentary or news report - to see rock musicians talk! It was the show's authority and enthusiasm for music that made it so unmissable, and the presenters' knowledge, which inspired trust and respect from the artists, was crucial. The world and everything in it seemed to stop while Whistle Test was on. And if you missed it - tough. There were no VHS recorders in the 1970s. Once it had been broadcast it was gone. Literally, in the case of the early editions, many of which were either not recorded, or became fodder for the bulk eraser.
How times have changed. Technology too. VHS's are almost a thing of the past - along with vinyl. Describing how records used to work is reminiscent of US comedian Bob Newhart's fictitious conversation with Walter Raleigh about tobacco. 'You put - did you say a needle! - on a piece of plastic and it does what?'
The advances in technology mean that now, three decades later, you can choose to watch this DVD chronologically, select individual presenter choices, or have the material played out at random. Mike Appleton, who devised and produced The Old Grey Whistle Test, puts the series in context through his commentary - describing the televisual and musical landscape of the time, how the programmes were put together, its relationship with the artists and record companies, what happened during the punk years, the highs and lows, some thrills and spills.
Whistle Test's six key presenters talk about the artists and performances which mean the most to them with the passion and humour they brought to the original shows. Where more than one presenter has chosen a particular artist (for instance Bob Marley, Little Feat or Rory Gallagher) you will find the additional introductions via the Presenters' Gallery. Some performances appear without any introduction. These are the highlights we couldn't leave out without risk of a riot. I still have sleepless nights about those who did get left behind on my master 'wish list'. If they'd all been included this DVD would have run for approximately 18 hours. But you know what they always say about encores: you have to leave them wanting more.

Artist gallery
John was a regular on Whistle Test and stepped in to fill a gap left by The Stranglers when they walked out on a recording of 'Rock Goes To College'. Still touring, he is one of music's most enduring and much-loved troubadours.

Intro by Richard Williams
"The Whistle Test was, above everything I think, a very good showcase for singer-songwriters, who were very fashionable in the early and middle seventies. And it was a perfect programme for them, because by definition of what they did, they could come into the studio with a guitar, or they could sit down at the studio piano, and just sing their songs. And generally speaking, their records weren't very much more than that. And that was absolutely fine, the programme had that sort of intimacy that benefitted them."
"Most of them were American, a lot of them were from Southern California at the time, but one of the best of them was British: John Martyn, who had basically come out of the folk scene, could play the blues, and had synthesised those influences into something I think pretty original. He came in once with his guitar and a bunch of machines and echoplex and things and played a remarkable long improvisation which was as powerful as anything we ever did."
"But he also sang the song that I think most people remember him for best, a beautiful bedsitter ballad called May You Never."

Old and Grey
So where did the name Old Grey Whistle Test come from? Apparently from one of the very few places where creativity was successfully matched to success in an office environment: the Brill Building. Whispering Bob Harris, who compiled the album, writes in the booklet:

"The origin of the name of the programme dates back to the days of the old 'Tin Pan Alley', when music publishing companies would employ 'in house' writers, who would work from the office on a kind of nine-to-five basis, turning out songs. The most famous of these 'song writing factories' was the Brill building in New York, where Neil Sedaka, Carole King, Gerry Goffin, Ellie Greenwich, Doc Pomus, Mart Shuman and many more created so many of the stunning songs that illuminated the charts in the late 50's and early 60's.
It has always been said that the songs that stand the greatest chance of making the charts are the ones with the strongest 'hooks' - a chorus that you can hum or whistle having only heard it once or twice. Consequently, at the end of a working week, the most promising songs were played to the cleaners, doormen and other staff in the building, people known affectionately as 'The Old Greys'. If they could whistle or hum along to a song having heard it only once or twice, the song was having seen as having the greatest hit potential, having passed 'The Old Grey Whistle Test'."

Bob Harris also makes an interesting remark in the description of May You Never: "John was a regular guest on 'Whistle Test' and my association with him continues. I recently introduced a superb session he recorded for the 'Saturday Sequence' for Radio 1."

CD caution
A collection of OGWT artists including John featured on a 1991 double CD called Best of the Test, to celebrate the show's 20th anniversary (Windsong OGWT CD1). Unfortunately these were not original live recordings from the Test but remastered studio tracks from the original albums. John's studio version of May You Never is included.
The same trick was repeated June 2010, when Rhino released a double CD under the title Old Grey Whistle Test.