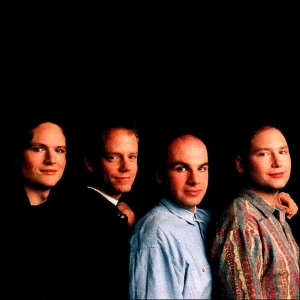 On "A collection of recordings that go all the way back to the very first days of the band."

John sings lead vocals on Man In The Station (6:37) and produces the following intro:
"This is a song which the poor devils have mistakingly learned - I can only thell them it will wear off, you know."

Known for quirky, abstract, and eccentric songs, Philadelphia alternative rockers Huffamoose have enjoyed a small but enthusiastic cult following since the early '90s. The uncompromising band was formed in 1992 when singer Craig Elkins joined forces with guitarist Kevin Hanson, bassist Jim Stager, and drummer Erik Johnson (who was replaced by Chuck Treece in the late '90s). They released three albums without commercial success.

sitenote:
Man In The Station was recorded autumn or winter 1993. Dean Sciarra was their manager and producer and record label owner in those days and it was due to his forward thinking that the band joined John Martyn for a gig in Philadelphia at The Tin Angel in 1993. There they recorded Man In The Station. Dean:

"What happened was that I (a forever fan of John's) heard that he was coming to Philadelphia and I talked the booking agent into allowing Huffamoose to open for John -knowing all along that I would have the band learn a few of John's tunes and then offer to jam at the end of his set. John selected "Last Train Home" [Man In The Station HB] and off they went into a very crowd pleasing rendition that impressed John so much that he invited the band to tour with him as his opening act and as his backup band. This did happen spring 1994 and was reasonably successful.
To my knowledge there are no other recordings of the band and John together - too bad!"

| Big Muff
@raringtoread @Guy_Garvey @BBC6Music @LdsIrishCentre Coming up, will check it out
3 weeks 6 days ago

| Kerrie Brown
So proud of my parents ❤ its time for someone else to enjoy their creation. Lots of history from WW1, village marri… https://t.co/WULTU1oYXC
6 months 2 weeks ago