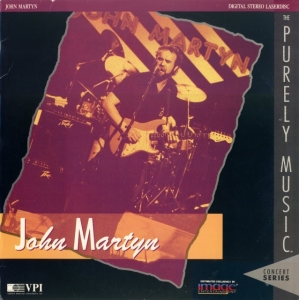 Rare German show from 1986 released on an even rarer medium.

The (excellent) recording was originally made for and broadcasted by German television, Südwestfunk, in the Ohne Filter series ('Musik Pur'). Line-up: Foster Paterson, Arran Ahmun, Alan Thomson. It has been broadcast in the UK also on a commercial station. Easy Blues is called "Jelly Roll" on the credits.

November 2006 Voiceprint made a DVD combination of this show called Empty Ceiling. The first 1.000 copies also had a CD included.

There are two kinds: CAV (one image per turn, Constant Angular Velocity, or the more CD-like format of Constant Linear Velocity (CLV, extended play). Four sound channels were available offering different options. Both disc sides could me made playable (actually they glued two discs together). Many movies still had to be delivered on three sides so two discs. US pressings often suffer from laser rot as a result of the wrong glue. About 12.000 titles were published in total, one of which is the -rather rare- John Martyn item.

| Paul Hillery
@bigmuffsite found this but didn't see it on your concert list https://t.co/NurVAf1AVs
10 months 3 weeks ago
END_OF_DOCUMENT_TOKEN_TO_BE_REPLACED