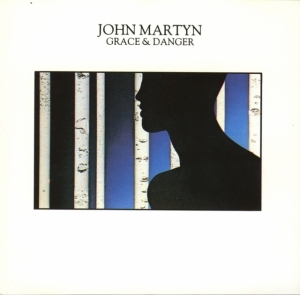 The heartbreak album and one of John's personal favourites. Phil Collins blends in well and subtle Weather Report influences result in a sophisticated sound.

'Thanks and various blessings for all concerned, love John.'

Chris Blackwell loved the album but at the same time it was said he hesitated to release it, finding it too emotionally disturbing. With a one year delay Grace & Danger hit the market. As late as 2008 John had a much more down to earth explanation for the delay: "I think the market was off – the Sex Pistols were big in those days. Chris was busy promoting The Slits and I was a bit unfashionable at the time."

His friend Phil Collins played drums on the album and had vivid memories of the collaboration (The Guardian, 15 November, 2002). He said Martyn is an unpredictable character who tends to wander into a hedge -or a pub- on his way to the recording studio:

"He lived with me for a while in 1978, and he drinks a lot, does whatever's around... He wanted me to produce his album a few years ago [probably Glorious Fool, HB]. I said that I'd co-produce it if he sent me the tapes, and he said that he'd bring them over in person [to Collins' house in Switzerland]. I told him: 'Stay right where you are!' He takes up a lot of space. But he's fantastic."

Bass player Chris Glen revealed in 2017 (in his book The Bass Business) that he was approached to play bass on the album.

In 1978 I got a call from a drummer called Timi Donald, who'd been in the Pathfinders in Glasgow. He told me, 'John Martyn is looking for you. I'm playing with him – would you mind coming in? He's doing production work for Grace & Danger.' I was getting £100 a day for production, which at that time was fantastic. Chris Blackwell, the Island Records boss, wanted me to play on the album, but I had to say, 'You'll need to get in touch with my management,' because they still had me under that contract. The management went, 'We want this, we want that, or we can't do it.' So John's people went, 'Let's forget it.' So John Giblin did it.

"Well ya bunch of English bastards. Riight ya want me tae be mair Scottish, is that whit ya wan? A''rrrriiiiight pal, yooouv'e goot it..." (Charity show on Hastings beach, 1991)

| Paul Hillery
@bigmuffsite found this but didn't see it on your concert list https://t.co/NurVAf1AVs
10 months 3 weeks ago
END_OF_DOCUMENT_TOKEN_TO_BE_REPLACED