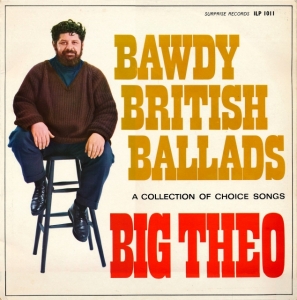 'A collection of choice songs' - indeed

John had nothing to do with this record! This is just about the only album Theo Johnson himself managed to get out - shortly after the release of London Conversation. Bawdy British Ballads contains folk songs full of sexual innuendo, a peeing dog and two sets of limericks. It probably was the repertoire he used to play in folk clubs like Bunjies and the Kingston Folk Barge. The man had a voice with limited range and sings from his throat.

The record label is Surprise Records but catalogue number and company address clearly point to Island Records. 108 Cambridge Road, London was the first place where Island had their office, from March 1963 to 1967.
The album was produced and designed by Chris Blackwell. And David Betteridge (who wrote the sleevenotes) was office manager there and later on became label director.
The building (now demolished) was originally a barber’s shop run by the Gopthal family. Chris Blackwell converted the space into offices. In 1962, the basement store at No.108 had been a recording studio set up by Sonny Roberts of Planetone Records. Blackwell introduced additional labels such as Black Swan, Jump Up, Aladdin, Surprise, Sue Records and Trojan which was run by Lee Gopthal. In 1968, when business picked up with the popularity of reggae, Island Records moved to the much larger Music House at 12 Neasden Lane.

Surprise records was clearly intended for the niche market of risqué records. For instance, ILP 1001 Music To Strip By (A free 'G' string is given away with each record), ILP 1007 That Affair (The Satirical Record to end all Satirical Records. The Profumo/ Keeler affair seen in its true light at last), ILP 1008 For Adults Only etcetera.

| Paul Hillery
@bigmuffsite found this but didn't see it on your concert list https://t.co/NurVAf1AVs
10 months 3 weeks ago
END_OF_DOCUMENT_TOKEN_TO_BE_REPLACED