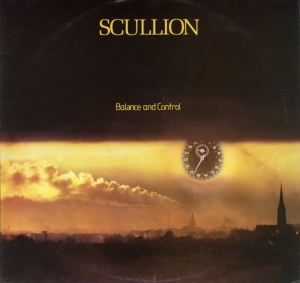 Only album John has produced for another artist.

So how did John Martyn team up with this Irish company? Scullion founding member Sonny Condell was also the man behind Tir Na nOg (1970-1974), a band on Chrysalis who were a member of the Island stable. In the early 1970's, Tir Na nOg created a distinctive sound which was all their own. An exotic combination of guitars, clavinet and African drums which at the time pushed the boundaries of folk into rock. Somehow this rings a bell...

Both JM and Tir Na nOg feature on the Dutch version of Island's El Pea sampler (1971). Scullion also covered John's song John The Baptist on their first album in 1979. Sonny Condell himself clarifies the matter:

"I first came across John when I was working in the band Tir Na nÓg in England. We did some gigs on the same bill, then later in the [late 70]s I think we, that is Scullion, did a short tour in Holland with him. [April 1980, John toured the Netherlands and Scullion were supporting act, ed.] It was then that I asked him if he would like to produce the next LP. He agreed and came to Ireland, and we enjoyed working with him very much. I think Balance And Control is my favourite of our Scullion LPs."

Which leaves the question whether JM played any instruments on this album, albeit uncredited. Sonny: "He didn't play any guitar on Balance And Control but he did help me with the harmony line on the song Circumstances."

Co-member Greg Boland also remembers this episode. They only had John for about one week, Greg is claimed to have said, leaving him to do most of the production himself. John's input nevertheless remained 'monumental'.

March 2016, a remastered version of the album came out on CD on the Prog Temple label.

No less than three singles were pulled from the album: Tension (1980), Eyelids Into Snow (1980) and a double A-side Back At Two | Jump in 1981.
Eyelids Into Snow and John The Baptist (a JM cover version from Scullion's debut album) were both rereleased on CD on the Eyelids Into Snow sampler (Hummingbird HBCD0023, released 15 January 2001).

| Paul Hillery
@bigmuffsite found this but didn't see it on your concert list https://t.co/NurVAf1AVs
10 months 2 weeks ago
END_OF_DOCUMENT_TOKEN_TO_BE_REPLACED