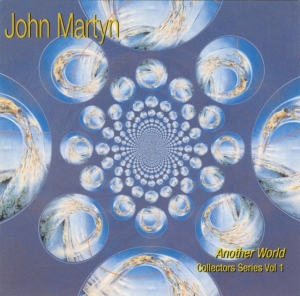 Interesting collection of One World first, alternate and outtakes, deleted though.

Most of the One World tracks are only slightly different from the official ones but provide good insight in the recording and mixing process.
Smiling Stranger is included twice in a funky instrumental approach.
Black Man At Your Shoulder was never released before and is one of the last echoplex extravaganza John committed to tape.
Couldn't Love You More and Smiling Stranger are also instrumental.

The cover says: "Limited Edition Bonus Disc" for the first 1,000 copies but there never was a second edition. Voiceprint deleted this title from the catalogue after some fuss with Island. There also was some delay as the record is apparently copyrighted and published 1998.

"Special thanks to Phil Brown for his help - in retrieveing these recordings"'
Engineer Phil also wrote fascinating liner notes about how the One World tapes were made.

John was totally unaware of this project. His comment: 'They're always doing that shit to me.'
Ten of these tracks however were released officially November 2004 on the One World Deluxe Edition.

"My personal opinion is that the UK mix is superior, and it seems to have been the one used for the CD release (although oddly some US mixes were used on the Electric and Sweet Little Mysteries compilations). Tristram Fry's wonderfully delicate, subtle percussion on the UK mix of Big Muff knocks spots off what was a clumsily played, badly recorded and crudely mixed drum overdub- the first time I heard it, I actually thought it might have been JM himself having a go. There seems to have been an attempt to make JM a little more 'commercial' for the US market by adding some reverb."

| Paul Hillery
@bigmuffsite found this but didn't see it on your concert list https://t.co/NurVAf1AVs
10 months 3 weeks ago
END_OF_DOCUMENT_TOKEN_TO_BE_REPLACED