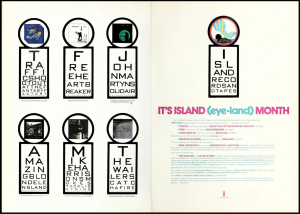 Cash Box was a US based weekly magazine for the music industry trade publishing record charts. This two page advert was to support sales during the stadium tour with Traffic and Free.
The text is clearly written for shop owners.
Part of the campaign was also a special promo album, 'An Island Sampler', with ten sample tracks of the artists mentioned. It has two catalogue numbers, one for each side: SPRO-6619 and SPRO-6620.

... with a fantastic release of new product, massive merchandising and sales support, and a magnificent tour.
THE TOUR began January 17 and will continue through February... featuring, on one bill:

Beginning January 19th is another tour, featuring Badfinger and

Last, and by no means least,

Island Month is also an excellent time to re-stock past Island product:

As noted, support for this major label release is massive, including complete store merchandising kits (for windows and in-store), lots of print and broadcast advertising, touring, extensive press and PR plans, and some of the best new albums from anyone... anywhere.

"Peace, Love and Expenses" (John praising the joys of performing)

| Paul Hillery
@bigmuffsite found this but didn't see it on your concert list https://t.co/NurVAf1AVs
10 months 3 weeks ago
END_OF_DOCUMENT_TOKEN_TO_BE_REPLACED