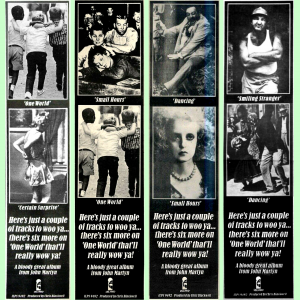 The release of One World was supported with various kind of advertisements. These series of one column ads are original in their approach and ran in several leading music magazines, mostly on the same day (22 April 1978).
Left to right:
Ad #1 was published in Melody Maker, #2 also Melody Maker.
Ad #3 is pulled from Sounds while #4 was found in the New Musical Express.

The text goes
"Here's just a couple of tracks to woo yah... there's six more on 'One World' that'll really wow ya!

Related to:
One World

| Paul Hillery
@bigmuffsite found this but didn't see it on your concert list https://t.co/NurVAf1AVs
10 months 2 weeks ago
END_OF_DOCUMENT_TOKEN_TO_BE_REPLACED