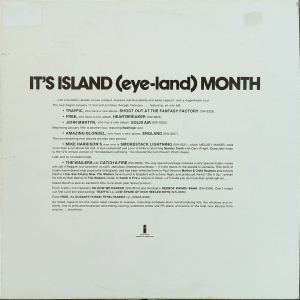 John has two tracks on this item; I'd Rather Be The Devil is shortened like the other long tracks (as indicated after the album titles).

"NOT FOR SALE"
"island records | available from capitol records"

Side A has a total playing time of 20:10, side B takes 21:29.
Track times on the labels are mostly accurate, Traffic's Evening Blue lasting 15 seconds longer.

The track info is printed on the labels, while the outer sleeve carries the following text, which is practically identical to the one used in a two page advert intended to boost sales during the stadium tour with Traffic and Free.
The copy clearly being targeted to shop owners.

... with a fantastic release of new product, massive merchandising and sales support, and a magnificent tour.
The tour began January 17 and will continue through February... featuring, on one bill:

Beginning January 19th is another tour, featuring Badfinger and

Last, and by no means least,

Island Month is also an excellent time to re-stock past Island product:

As noted, support for this major label release is massive, including complete store merchandising kits (for windows and in-store), lots of print and broadcast advertising, touring, extensive press and PR plans, and some of the best new albums from anyone... anywhere.

| Paul Hillery
@bigmuffsite found this but didn't see it on your concert list https://t.co/NurVAf1AVs
10 months 2 weeks ago
END_OF_DOCUMENT_TOKEN_TO_BE_REPLACED