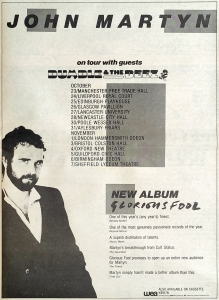 This advert was printed on page 33 of the New Musical Express, 10 October 1981. It contains 14 tour dates.
The same issue of the magazine featured an interview with Chris Salewicz, Johnny Done Badly. And a review...

JOHN MARTYN
on tour with guests
BUMBLE & THE BEEZ

One of this year's (any year's) finest.
Melody Maker

One of the most genuinely passionate records of the year.
Record Mirror

Glorious Fool promises to open up an entire new audience for Martyn.
The Times

Martyn simply hasn't made a better album than this.
Time Out

sitenotes:
So where is the NME review? It has been strategically left out, while it was published in the same issue:
"Consistency has never been John Martyn's strongest quality but the rabid mediocrity of Glorious Fool comes as a shock after last year's Grace & Danger"
Etcetera.

| Paul Hillery
@bigmuffsite found this but didn't see it on your concert list https://t.co/NurVAf1AVs
10 months 2 weeks ago
END_OF_DOCUMENT_TOKEN_TO_BE_REPLACED