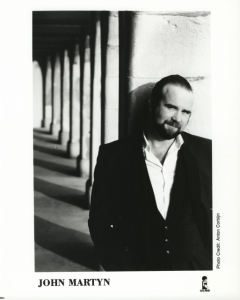 The coming year is a landmark for John Martyn. It is twenty one years since his first professional shows, the start of a career that has claimed a special place in music. His dozen albums, stretching back to 1968, provide extraordinary evidence of his skills as a vocalist, musician, and songwriter. Each year has brought a fresh chapter in the evolution of Martyn's music; his latest LP, "Foundations" is a resoundingly contemporary interpretation of many of his classic songs, highlighting his formidable vocal range and his innovative and eclectic songwriting.

Although Martyn's formative years as an artist were spent on the folk circuit, he has subsequently produced a unique blend embracing the improvisational qualities of jazz, the lyrical sensitivity of folk music, and the emotional depth of the blues. Martyn, however defies simple categorization. He has always been open to experiment, and to the constant regeneration of his music.

Martyn's first album, "London Conversations," [sic] was released in 1968. Though it wasn't a commercial blockbuster, it gave Martyn considerably more presence on the club circuit.

His second LP, "The Tumbler," released the following year, clearly showed the growing maturity of Martyn's music, and in particular, his fascination with jazz. The album featured saxophonist Harold McNair - a bold stroke which defied all the rules of the insular folk atmosphere of the time.

The next album, "Stormbringer," took on even more instrumentation to the point where Martyn was playing in a full group context. By this time he had met Beverley Kutner, a solo artist with two singles to her credit, and became first her accompanist, and then her husband. They recorded "Stormbringer" in Woodstock, in the summer of 1969.

The "Road To Ruin" LP, recorded in London, continued the flow of subtle improvisation, incorporating percussion and the work of three woodwind instruments. Also on hand was acoustic bassist Danny Thompson, who was to become one of the mainstays of Martyn's recording projects throughout the Seventies.

At this point Beverley dropped out of professional music with the onset of motherhood. John went on to record "Bless The Weather," in retrospect a real breakthrough album for him. It was a much simpler album in terms of instrumentation and outlook, and much warmer in its emotional stance.

A full year elapsed from the release of "Bless The Weather" to Martyn's next recording session in November 1973, a recording date which resulted in one of his finest albums, "Solid Air." The album also revealed a new twist in Martyn's style and direction. His vocals were now slurred and strangled to the point of effacement, becoming another part of the instrumental mix. It was still possible, in most instances, to decipher the lyrics; but more important than the words themselves was the feeling in the way they were delivered.

It was hardly a new technique. It summoned up the growls of the early blues singers as well as the jazz tradition of Bessie Smith and Billie Holiday. Martyn has often cited the importance he placed on the American blues singers of the first half of the century, and one in particular with whom he identified was Skip James, whose "I'd Rather Be The Devil" was included on "Solid Air."

The album provided a real breakthrough for Martyn, who established a rising reputation in both Britain and American [sic]. "The industry wanted another Solid Air and they let me loose in the studio, a totally free hand... they must have been mad," says Martyn.

The next two albums, "Inside Out" and "Sunday's Child," were both rushed in execution. Although Martyn swears he is against recording on deadline, on the evidence of these records, he thrives on the adrenalin rush of working at a considerable clip. Ironically, his next two LPs took a long time to record.

In 1976 Martyn went to Jamaica, an experience that was to widen his musical vision. He remembers, for instance, playing with producer Lee Perry on sessions for a Max Romeo album. "They asked me at the end of the session how I'd like to be paid - in counterfeit dollars or blue films. I took the dollars, 'de yankee dallah'," recalls Martyn.

The sounds of Jamaica were to influence his next album, "One World." The record was made in London, with Island founder Chris Blackwell as producer. The result was masterful. It was perhaps the most complete expression of Martyn's talents yet set to vinyl. Martyn's eclectic influences were more than evident, but his own attitudes were radically changing. "I didn't like what was happening to me. I was becoming the epitome of the hippy era, the long-haired father figure bearing down on mother nature with the lovely wife and lovely children, happy smiles and brown bread. I wanted to get a bit harder. So I changed the point from where I write and moved it to a less personal, more global, I suppose, political, area."

It took three years for Martyn to deliver another album, the emotionally exposed "Grace & Danger." During that time Martyn's marriage with Beverley broke up. It was, he admits, a "dark period" in his life, during which he was crazier than normal, doing things almost with a death wish. Few albums have been so revealing in their theme. One of the musicians on the album was Phil Collins, with whom Martyn quickly formed a creative relationship. It was obvious the partnership would be used again.

In 1981 John Martyn left Island, signing a new recording deal with WEA. His first album for the company was "Glorious Fool," produced by Phil Collins. It included an uptempo version of the classic "Couldn't Love You More," with guitar work by Eric Clapton, on whose recent tour Martyn's band had been the support act. Around the same time Clapton did a cover version of Martyn's "May You Never" for his "Slowhand" album. "Glorious Fool" was followed, a year later, by "Well Kept Secret."

Martyn left WEA for Island in the summer of 1984. He went to the Compass Point Studios in Nassau where, using a band that included Barry Reynolds (guitar), Alan Thomson (bass), Jack Waldman and James Hooker (keyboards), and "Sticky" Thompson (percussion), he recorded the "Sapphire" album.

"Sapphire" was released in January 1985 and coincided with a highly successful British concert tour. In Europe the album was exceptionally well received by the critics. Over the next few months Martyn's schedule included a series of British concerts in late May, writing and recording the theme music for the forthcoming David Bellamy TV series on world ecology, a tour of the States and Canada, and a sprinkling of summer festivals in Europe. He was also one of the headliners at the prestigious Cambridge Music Festival.

In the autumn Martyn returned to the recording studio to start work on a new album for 1986. That year marked a landmark in Martyn's career; his 20th anniversary as a professional musician. Today, after twenty one years on the road and 20 albums behind him, John Martyn has changed little. Unaffected by the hype and the ephemerality of the music business, he remains at heart a romantic rock folkie and a music professional.

sitenotes:
This text is from a press kit also containing an Anton Corbijn promo picture.

| Paul Hillery
@bigmuffsite found this but didn't see it on your concert list https://t.co/NurVAf1AVs
10 months 2 weeks ago
END_OF_DOCUMENT_TOKEN_TO_BE_REPLACED