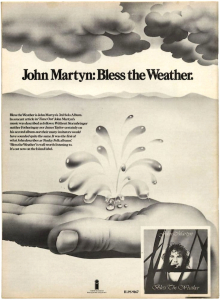 This advert supported the release of Bless The Weather. It was published in Melody Maker, probably around 13 November 1971.

Bless the Weather is John Martyn's 3rd Solo Album.
In a recent article in 'Time Out' John Martyn's music was described as follows: Without Stormbringer neither Fotheringay nor James Taylor -certainly on his second album- nor their many imitators would have sounded quite the same. It was the first of what John Martyn describes as 'Funky Folk albums'.
Bless the Weather is well worth listening to.
It's out now on the Island label.

The article referred to is John Martyn Keeping Everything A Lot Less Rigid, by Richard Howell. Published in Time Out of 1 October 1971.

Related to:
Bless The Weather

| Paul Hillery
@bigmuffsite found this but didn't see it on your concert list https://t.co/NurVAf1AVs
10 months 2 weeks ago
END_OF_DOCUMENT_TOKEN_TO_BE_REPLACED