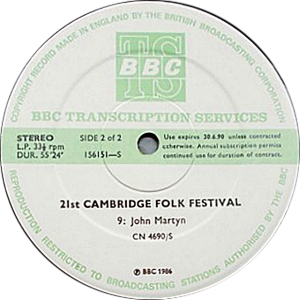 Unknown number of tracks from the Cambridge Folk Festival.

John performed the 21st Cambridge Folk Festival on 27 July 1985. The material was broadcast a few months later, 22 February 1986.
The A-side contains material by Loudon Wainwright III from the same line-up.
The B-side lasts half an hour, so half of John's set was left out.

There were more transcriptions of the festival, at least twelve records must have been made.

The recorded material was officially released as late as 1 December 2003, titled Live In Concert at the Cambridge Folk Festival.

The vinyl disk probably also contains Pete Drummond's intro:
"Hello this is Pete Drummond, welcoming you to this week's In Concert. Now for the next hour, we are going to hear the set performed at last year's Cambridge Folk Festival, by the band led by that superb singer and songwriter, John Martyn."

Copyright notice on the label:
Copyright record made in England by the British Broadcasting Corporation. Reproduction restricted to broadcasting stations authorised by the BBC.
Use expires 30.6.90 unless contracted otherwise. Annual subscription permits continued use for duration of contract.

sitenotes:
I managed to track down three BBC Transcription Service(s) records featuring John Martyn. The copyright extended until 4 years and 4 months after the broadcast.

| Paul Hillery
@bigmuffsite found this but didn't see it on your concert list https://t.co/NurVAf1AVs
10 months 2 weeks ago
END_OF_DOCUMENT_TOKEN_TO_BE_REPLACED