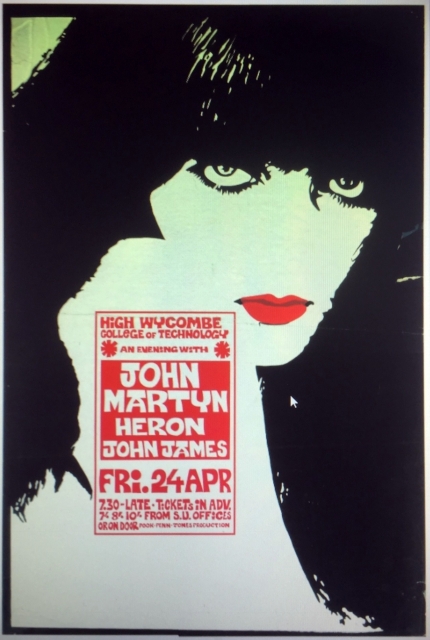 This poster was unearthed by Roy Apps, founder member of Heron. He remembers the occasion and meeting John Martyn well: "He’d just bought a new wah wah pedal that day and played through it a quite lot on the gig! We knew him pretty well in those days - great guy!!"

Heron was a band founded in 1967 by Tony Pook, Roy Apps and initially Robert Collins. The band was loosely inspired by Bob Dylan and the Incredible String Band and recorded two collectable albums, literally outside in the fields: Heron (1970) and a double LP Twice As Nice And Half The Price (1971). The band hated recording in a studio. "Thus it was that, in the summer of 1970, the band and their loved ones decamped to Appleford in Berkshire, staying at the farmhouse where Tony Pook’s family lived. It was out in the field at the back of the farm that, with the assistance of the Pye Mobile Unit, they recorded their self-titled debut album. […] Pretty much everything had a strong sense of coherence and uniformity of mood, with the sound of birds singing in the trees adding to the album’s relaxed vibe."

I am not the only one who had to think of the recording process of Small Hours..
Another harmony note is that the band never saw commercial success.

The band is not to be confused with a short-lived incarnation of Mike Heron's Reputation in the mid 70's, which was also called Heron until 1977. (Mike Heron founded the Incredible String Band with Clive Palmer and Robin Williamson).

| Paul Hillery
@bigmuffsite found this but didn't see it on your concert list https://t.co/NurVAf1AVs
10 months 3 weeks ago
END_OF_DOCUMENT_TOKEN_TO_BE_REPLACED