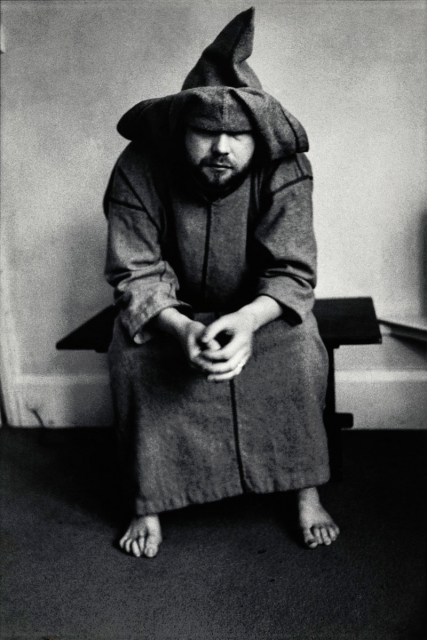 This is an iconic photo used for the cover of No Little Boy. It was taken by famous Dutch photographer and director Anton Corbijn, around March 1978.
First time it was used in print was in an interview by Bert van de Kamp in the Dutch music magazine Oor, published 8 March 1978. It was included in the book Famouz.
The picture also featured in various Corbijn expositions, for instane at the Stedelijk Museum, Amsterdam, April-May 1994.

At the time John was living in Heathfield (East Sussex). In the words of Beverley:

"And so, in 1976, we moved to Heathfield, a quiet country town in Sussex, where we first rented, then bought a big beautiful detached house called Kenana. It had the county's only Douglas fir tree in the front garden and I loved living there. There was a large garden for the children and it should have been idyllic. But for me it became hell."

In John Neil Munro's biography Some People Are Crazy, the Heathfield house is called Kenyata and situated at Tilsmore Road. Once it had been "a smart country house. But by the mid-1970s it had a reputation as a drug den and was well known as a place for scoring." [This was before the Martyn family lived there, ed] Beverley lived in the house until she sold it in 1989. Eventually it was pulled down to make way for a new housing scheme.

| Paul Hillery
@bigmuffsite found this but didn't see it on your concert list https://t.co/NurVAf1AVs
10 months 3 weeks ago
END_OF_DOCUMENT_TOKEN_TO_BE_REPLACED