You don't have to be in Harlem

"The Story Of The Most Celebrated Rock Venue In Britain"

This was the Glasgow Apollo Theatre. John made a tiny contribution among many others. 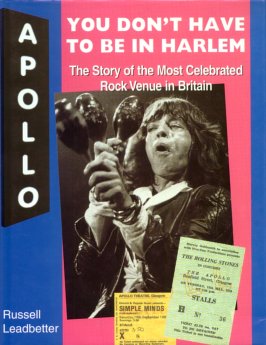 In spite of an announcement in the cover blurb John hardly plays any role in this book. He literally gets one paragraph in two chapters with 44 artists reminiscing. Still it's a nice and well illustrated history of a typical Glasgow pop venue. Things to remember: the bouncers were pretty rough, the stage was high, the balcony moved, the theatre was rather run down but the audience was amazing. And oh yeah, Status Quo played a few gigs but the Sensational Alex Harvey Band was much more interesting.
The Apollo was in operation September 1973 to June 1985. After a fire in 1988 it was demolished. The building in Renfield Street started out in 1927 as a cinema, Green's Playhouse and could host some 4.000 guests. Above the entrance was a smaller venue, Satellite City, initially called Clouds.

And now for JM's massive contribution from page 46:

I only played there once1 - supporting Traffic and Free in an Island package-tour. I went a couple of times as a fan, to see bands like Earth Wind and Fire2 and Alex Harvey3 - he was brilliant, a real showman. The audiences at the Apollo were very traditional Glasgow audiences. I wouldn't have liked to have played a bad gig there! But if you were swinging, they were cool.

mufnotes:
1 This Traffic gig would have had to have taken place in the course of 1974, according to the book. There were several Traffic gigs that year: 21 February, and also 24 and 25 April (supporting act Richard & Linda Thompson). But Free was defunct as of 1973...
John might have also been referring to a Traffic gig at Green's Playhouse, 20 January 1971 but then the supporting act were Beggar's Opera. My best guess: the only Free concert, presented by Island: Thursday 24 February 1972, Green's Playhouse.
2 Earth Wind & Fire were supporting act for Santana, 17 September 1975.
3 SAHB played the venue 10 times but their most legendary performances were a series of Christmas shows in 1975.
The original hardcopy book cost £ 14.99.

| rab zappa
@veniveci @bigmuffsite Times were so much simpler then! He's the 20th century Burns and more.
1 month 3 weeks ago

| Jacqueline W
@bigmuffsite Also are you aware that Sweet Little Mystery is used in Devs which is on iPlayer at the mo? Episode 7
2 months 1 week ago

| Jacqueline W
@bigmuffsite trying to find footage of JM singing with his eyes open! Can you help at all please?
2 months 1 week ago

| rab zappa
@JjjVinyl @bigmuffsite oh well I do still have a couple of copies after all..
3 months 2 weeks ago