JOHN MARTYN was born in Glasgow in 1948, though never a great commercial success, John Martyn's eccentric brand of folk, elliptical songwriting, intimately bluesy singing, jazz flavoured music, has held steady appeal for critics and artists. Producing over 19 albums, John Martyn has proved himself a man of exceptional talent. He appeared in Galway on Friday, March 7th playing in Leisureland, beginning at 9.45 p.m. John Martyn played until 11.35. After the concert Ray Hanlon and I went backstage and waited until John was sufficiently refreshed to give us an interview. A small dark-haired girl approached us and said "Hi, I'm John Martyns wife". I presumed that this was 'Beverley', his first wife since he had produced two albums with her, Stormbringer and The Road To Ruin and I said "You must be Beverley." Gosh! I wanted to melt into the floor when she said (raising both eyebrows) "He divorced Beverley nearly 10 years ago." That was such a wonderful beginning to an interview!! But all in all I found ANNIE MARTYN extremely charming and very talkative…

Me: What does John normally do when he is in a temper?
Annie Martyn: He goes into a sulk sometimes, but when he comes out of it, its alright, but being married to a musician, that's the thing, you know, I was speaking to somebody the other day and they said 'What is it like being married to a musician?' and I said 'If you marry a musician you obviously have the same temperament as them.' I often ask myself 'Why am I not a calm classic person, and I'm not, then I could put up with it all.'

Me: Do you mind travelling all the time?
Annie: No, I'm not a very domesticated person, some mornings I get fed up packing the suitcases, but really I don't mind at all. We just spent five weeks around England, and that was not much fun, we are going to Europe now.

Me: What do you think John really hates?
Annie: Maggie Thatcher -(she giggles hee hee hee!)- He's a socialist you see. John has become very disillusioned with England and Scotland, the British place over there, it's absolutely ridiculous, rape, children being killed, people dying, it's as bad as that. He lived in England with his ex-wife Beverley until whenever they got divorced 1976-77, he lived in Hastings and Heathfield, and then he moved back to Scotland, but, he's becoming very disillusioned with Scotland, it is not a very nice place to live! I mean England in general.

Me: What does John most fear?
Annie: His mother in law Ha! Ha! Ha! (talking about Annie's own mother). We cut the interview here since John was now sufficiently refreshed after the concert to give us an interview. So Ray and I entered his dressing room, to find the whole band giggling and chatting whilst opening bottles of Lager with a cheer every time they managed to unscrew the lid without employing a corkscrew, it resembled the launching of a thousand boats, behind a cloud of smoke I saw John Martyn with two empty chairs beside him, he gave Ray and I a huge grin and we sat down. 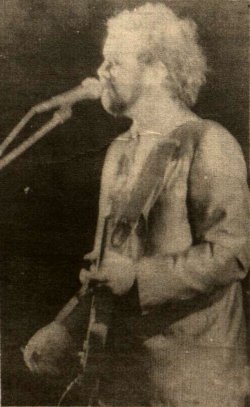 Me: John, over the past few albums why have you become more electronic with the exception of your latest album Piece by Piece?
John: Because technology increased at such a rapid rate, it was virtually impossible to ignore it, the music was outweighed by such a vast amount of technology.

Me: Is there a history of music in your family?
John: Oh yes! he laughs, my father and mother were both great opera singers. Ah no it was my grandmother actually who introduced me to classical type music.

Me: What religion are you?
John: I am a Protestant.

Me: So you practice?
John: Me no! no! I don't like religion much, but I do like some parts of religion don't you?

Me: What do you really hate?
John: I don't like dishonesty, and I don't like fascism, put these two together and you have my two pet hates.

Me: What was the most memorable time in your life?
John: The very first time I was ever bitten by a dog, I was 18 months old, the dogs name was Curach, oh! that dog was a bad dog, he was a Cairn Terrier and I allowed my hand to drop in a moment of relaxation ouch!

Me: Do you have any happy memorable times?
John: (His eyes lit up and he gave an evil grin) I suppose the first time, I ever genuinely felt... Oh no I can't, I can't... My manager would kill me, my life has been too good.

Me: How would you classify your own music now?
John: I could not even begin to think about it. I could not actually put it in a box, it's very strange, it appears to be high bred, it's like I am an ambassador for older and younger generations, it's very variable.

Me: Well then if you could change something on your face?
John: My teeth, I'd like my teeth back, my teeth are actually rotten, rotten right in, it's all the... Coca Cola, those girls and boys on the Coca Cola ads with the white teeth will be laughing on the other side of their faces in a couple of years!

Me: Some people say a beard is hiding something, what are you hiding?
John: You would not like to see it, honestly! I took it off two years ago, oh it was horrible! I could not believe it myself, I looked like Bill Sykes1, all I needed was a bow terrier and a club. 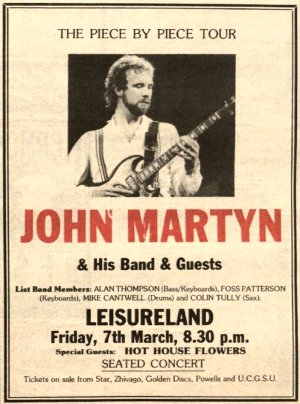 Me: What qualities do you look for in your ideal woman?
John: 'Annie, Annie (he is calling his wife), this one is trying to seduce me' (he laughs because he knows I'm nearly falling off my chair after already having one run-in with her).
Annie: If you seduce my husband honey bun, I'll kick you out on your ass!
John: The only woman I ever dreamt about was Brigitte Bardot when I was 14, she was the only fantasy figure I ever indulged in.

Me: What do you do during your free time?
John: At the moment there is no free time, I think I'm allowed two days next week, during that period I will undoubtedly sleep and eat as well, just treat myself.

Me: John, thanks very much for the interview, is there anything you would like to say to Galway people in general?
John: Just tell them that I'm very passionate.

A very special thanks to O'Connors for loaning me a dictaphone.

1 sitenote: Unclear who John is exactly referring to. Bill Sykes is a grim character from Charles Dickens' Oliver Twist.

sitenotes:
This must be the only interview featuring Annie Furlong talking. It was published in the Galway Advertiser of 27 March 1986 on page 6. Many spelling mistakes ('Stormsinger', 'Beverly') have been corrected. The advert ran in the edition of 6 March.

| Paul Hillery
@bigmuffsite found this but didn't see it on your concert list https://t.co/NurVAf1AVs
6 months 3 weeks ago
END_OF_DOCUMENT_TOKEN_TO_BE_REPLACED