The Story of Balance and Control

B-Side The Leeside: The latest in our series looks at the album John Martyn produced with Scullion in 1980 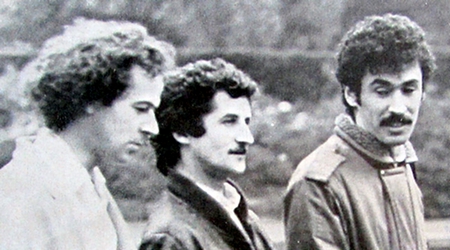 Down a laneway off St Stephens' Green, Keystone Studios received an auspicious baptism when, in the spring of 1980, Sting became one of the first artists to record there. The Police frontman had moved to Roundstone in Connemara for tax purposes and came to Dublin to demo material for the band's third album, Zenyatta Mondatta. Keystone had started in 1977 in a basement on Harcourt Street. But in 1980 it reopened at the rear of 22 St Stephen's Green, around the corner from the Shelbourne Bar and from O'Donoghue's on Baggot Street. And it received an appropriately glamorous initiation as Sting made the trip from Galway to lay down early versions of Don't Stand So Close To Me and De Do Do Do, De Da Da Da.
The Police weren't the only outfit creating history that year at the studio, which would be subsequently renamed "Windmill Lane 2" and continue to operate until 1990. Several months later another power trio, Cork/Wicklow/Dublin group Scullion, were at Keystone recording their sublime and singular second record, Balance And Control, under the mercurial gaze of folk icon John Martyn.
"I remember John dancing around with pleasure," recalls Scullion vocalist Sonny Condell. "We didn't know how it would work out. John could be a hard man. But our experience of working with him was the reverse of that. It was a lovely time."
Here is the story of how the record came to be made – and an argument why it deserves to be re-discovered and cherished as an early folk-pop classic. It qualifies for the Cork canon through the involvement of Philip King.

Condell from Newtownmountkennedy in Wicklow made his reputation playing with Leo O'Kelly in progressive trad band Tír na nÓg. Feted in the pages of Melody Maker, the duo were heralded as Ireland's answer to English folk revivalists such as Pentangle and Fairport Convention.

O'Kelly and Condell would continue to work together through the 1980s and 1990s. But they had drifted apart in the mid-1970s, when Condell met multi-instrumentalist Philip King. King had grown up in Glasheen, a suburb on the southside of Cork City. Studying arts at UCC, he connected with composer and arranger Seán Ó Riada (credited with reviving Irish traditional music through the 1960s) and prominent Irish language poet Liam Ó Muirthile. Those influences would stay with him through his life and career.

Completing the Scullion line-up was Greg Boland, the son of a Sandymount Dublin allergy specialist, who brought a jazz-pop component that complemented Condell's passionate writing and King's encyclopaedic knowledge of folk and blues.
"We had recorded the first Scullion album for Mulligan [the Irish independent label founded by Donal Lunny]," recalls King. "Mulligan went into decline quite quickly after that. They had been doing stuff like the Bothy Band and [folk singer] Liam Weldon. And the first Boomtown Rats single."

Scullion's debut included King's I Am Stretched On Your Grave, the lyrics from a Frank O'Connor translation of an 18th century Irish-language poem. The track would acquire a second life when later covered by Sinéad O'Connor (and by Dead Can Dance on their 1994 live record, Toward The Within).

There and elsewhere, the magic of Scullion flowed from the contrasting influences the three principals brought, King feels. "Sonny had come from the Tír na nÓg world. I had come from a different sort of world. And Greg Boland had, I suppose, an American sensibility – he was listening to early Steely Dan, Weather Report, Chick Corea. All that stuff."

Scullion toured constantly, building a fanbase in Ireland and on the Continent, particularly the Netherlands and Germany. This was how they came to cross paths with John Martyn,1 a luminary in the world of folk and rock, whose 1973 LP Solid Air is credited with blurring the lines between rock, jazz, psychedelia and acoustic pop. It is still cited as a touchstone to this day by artists such as Ben Howard, while Martyn's use of looping pedals, clearly influenced Ed Sheeran.

"John was a musical innovator," says King. "That is part of his contribution that has been overlooked. By the time you get to things like Inside Out and Solid Air, he was working with echoplex tape machines, all that stuff. I would go so far as to say that when you listen to The Edge's sound on things like With Or Without You, John Martyn was the precursor. He was the musical expeditionary that had the vision." Martyn could seem enigmatic and detached on stage. In person, Scullion found him personable and grounded.
"In the Netherlands, he actually ended sometimes driving with us in our Volkswagen, which was great gas. We had great fun on the road," says Condell. "So we got up the nerve to ask him would he produce us. He came back and said he would."

As chief songwriter, Condell was the guiding force behind Scullion. He was eager to collaborate with Martyn and learn from the master. Behind the scenes, meanwhile, was Clive Hudson, chief executive of fledging WEA (today Warner Ireland), which had made Scullion its first signing.
"Clive was a warm-hearted guy," says Condell. "We enjoyed working with him. We didn't have great plans. That this was going to be a such and such record. These were the songs. We did our best. We got an interesting producer to take them someplace else. We left them in the hands of the gods, in a way. And it turned out very well – the album, when you listen to it today, is catchy and warm."

Catchy and warm but with a sometimes ominous streak. Amidst the smooth and propulsive Condell cuts, King's Fear had a Talking Heads twitchiness. The melodies were slick. Yet a heart of darkness was nestled within.
"It had a jittery energy and a jittery subject," says King. "I was learning early on that life on the road is not what it looks like. It seems very alluring. But it is dangerous and difficult and can lead to dark places. That song was about the level of difficulty and, I suppose, rejection that are part and parcel of any artist's life."

Balance And Control was not a global hit. It received approving reviews, though, with Hot Press giving it an emphatic thumbs up.2
"[Condell's] songs, and Philip King's Fear…need no parochial apology," said the magazine. "They stand on their own alongside anything you'll hear from abroad. And that goes for the group as well".

And it set Scullion up for a run of successful records, including 1983's White Side Of Night (produced by future Enya collaborator Nicky Ryan). Boland left in 1986 (and passed away in 2018), to be replaced by Robbie Overson.
The group remains a going concern and, the occasional pandemic permitting, perform together several times each year. Currently working on a new LP, they look back on Balance And Control with enormous fondness.
"Like all records, there are some things that sound strange to my ear right now," says King. "But there are two or three songs there – you could put them on today and they really do endure."

sitenotes:
1 April 1980, John toured the Netherlands and Scullion were the supporting act. Both acts also featured on the bill of the Irish Lisdoonvarna Festival of 12 July 1980.
2 The review by Dermot Stokes from November 1980 is included in this site.
This article was published in the Irish Examiner of 21 July 2021.

Related to:
Balance And Control

"I have no idea who these people are. Happens all the time."
(After band members have come on stage)

| Paul Hillery
@bigmuffsite found this but didn't see it on your concert list https://t.co/NurVAf1AVs
6 months 2 weeks ago
END_OF_DOCUMENT_TOKEN_TO_BE_REPLACED