The Stormbringer Comes Into The Sun 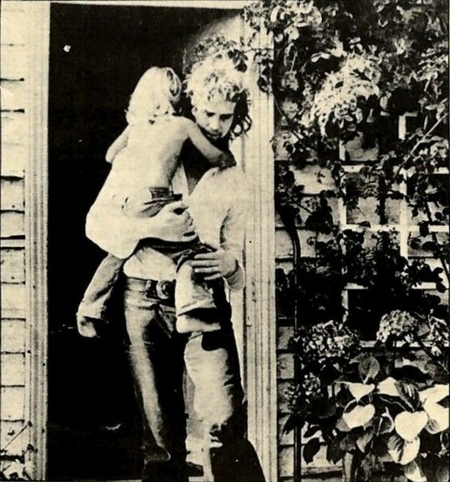 JOHN MARTYN has made six albums, two with his wife Beverly, and after seven years he's just coming out into the sun. Critics in both Britain and America have been talking about him for a long time, and groups and singers record his songs - numbers like Would You Believe Me?, Bless The Weather, John The Baptist, Stormbringer, and his signature-tune Head And Heart.

Now, with his unmistakable vocal style and his increasingly extraordinary guitar technique, Martyn is beginning to reach the wider audience and we can all sit back and watch him go. Recently returned from America, where he shared the bill on the Traffic recent tour, he bounced into a pub in Westbourne Park to tell me a thing or two - firstly about his last album, Solid Air, which reputedly took a long time to put together.

"No, what happened was I did a lot of sessions with some very heavy super-starry people and didn't like it. I scrapped it, much to everyone's dismay. Consequently I left myself with about eight days in which to do the album - because the deal was that I had to have one to coincide with the American tour. I'm not as pleased with it as I have been with previous ones, although vocally it was a step forward. I've never sung as good as on that record. But at the time I made it I was capable of singing even better - and playing better. It was all too rushed."

"The next one's going to be a lot heavier. There'll be more blowing on it from me. Previously, I've tended to let other people do most of the blowing. I mean, if you come out front when you're playing with good musicians, you're making an ego statement. My idea is that everyone, providing they're strong enough people - should impress their personality on the final sound."

The last two albums have, on that level, been a record of the evolution of Martyn's interplay with string-bassist Danny Thompson, a close and infinitely subtle relationship which reaches a peak on Solid Air with the final three minutes of I'd Rather Be The Devil.
Says Martyn, "If you liked that, you'll really like the new album. I'm trying to get freer and less structured and Danny's the only cat I've found so far who can follow. I tend to play lead and rhythm and bass all together because of my background of solo experience in folk clubs, and musicians seem to find that hard to get into. Danny does it like second nature and it's been a gas to work with him."

What about those folk-clubs then?
"I've moved out of them. I felt the whole movement restrictive. I mean, The Wild Rover is still unfortunately with us. The folk thing gets easily snookered and tends to run up its own ass a lot. Mentioning no names, most of the people who are being hailed today from the folk-scene are playing bullshit, as far as I'm concerned. Traditional music is so strong, rhythmically and melodically, that I find electric instruments fight against the original values. They're there for dramatic effect. Like mutton dressed as lamb. The music's not meant for huge stages and loud volume. It's meant for intimate circumstances or small social settings. It's meant for your heart, not your head."

"Very few people are trying to reach the heart these days. Even McLaughlin fails cos he's trying to move the heart through the head - and that can't be done. But B.B. King, for example: he can be fucking boring, man, but he still plays those heart notes and when he's on his night he's going to blow your head off. Not many can do that these days. I tell you - I'm really hung up on heads and hearts."

You think they're completely separate?
"Yeah, I genuinely do. I mean, obviously they fuse together in your life, but they're two quite different things. Say you see a photograph of a Biafran child with its bones sticking through its skin - you heart is, what brings the tears to your eyes and makes you want to leave everything and to out there and feed that child. But your heart says: Listen, man, there's millions of those and only one of you; stay here, do what you can, try and do it through the music, look after your own interests. Initial reactions, to me, are heart reactions. I wouldn't trust head, or heart finally though. The closest I can get is, that I use my head to temper the judgments of my heart."

"I feel strongly that there's a great dearth of heart everywhere right now. The drug-culture has laid too heavy an emphasis on the expansion of the head. Sure, politics and practicality may prove your heart to be suspect at a given moment, but the power's still there. Like, I'm married with two kids - and, quite literally, the most important things to me are my children's' smile and my woman's love. The head is totally divorced from those."

"I suppose in some ways I'm a coward because I think that the more you think in today's society, the more you're gonna get fucked up. The point of my music is to pull people back to this heart thing. So many people have forgotten how important the heart is. Money's the root of the problem - the whole socio-economic thing. We've been conditioned to strive. We came out of school as so much economic cannon-fodder. The heart was excluded from the start and we accepted it. We shouldn't, man, we just shouldn't take that shit. It's all too easy for sensitive people to prostitute themselves in this society but pandering to The Establishment is quite simply an evil choice. It's not good that someone like me should earn £ 250 a night when my father has to sweat his guts out for his £ 30 a week. But I'm not into bloody revolution, I'm interested in watching what's going on very carefully."

"Bowie's a poseur, too. I don't think he's lived a quarter of the things he sings about and, to me, living it is crucial. Life is real. Life's in earnest. It isn't a play. People are real and they have hearts, whether they realize or not. It's no battle get up there and sing whatever's in your head at the time, but it's a whole other scene to lay your heart on people. l want to be able to take my clothes off, in front of everybody and say: See? I'm just like you. That is, the happening thing, not whatever bullshit the papers tell us. It's always been what's happening and it always will be."

sitenotes:
The story was first published online in 1997 on The John Martyn Connection, by Kees van der Lely.

| Elliott Franks
John Martyn live at The Anvil in Basingstoke on the 27th April 2004 mad to think this was 16 years ago… https://t.co/fmbKEx3uCY
1 month 1 week ago
END_OF_DOCUMENT_TOKEN_TO_BE_REPLACED