T FIRST, IT seems like a typical early John Martyn live show, a stripped-down and intimate set of folk/ jazz originals, with the occasional detour into other artists' songs, like Bob Dylan's "Don't Think Twice, It's All Right". But then, after leading his small audience through a hearty singalong of "Singin' In The Rain", Martyn straps on an electric guitar...

It's May 19721, and Martyn is about to do something bold, arguably as bold as when Dylan went electric for the first time at the Newport Folk Festival seven years earlier. Launching into "I'd Rather Be The Devil", the subdued folkie makes a radical shift from the contents of his first five albums, adding reverb and feedback via an Echoplex effects pedal.

The Echoplex would make its full studio bow on the following year's Solid Air (after a brief appearance with acoustic guitar on 1971's Bless The Weather), but this show in Richmond, London, was the first time fans were introduced to a new John Martyn, and it features in full on the forthcoming Island Years, an expansive 18-disc boxset covering Martyn's 20 years at the label.

"The Hanging Lamp was a Monday night folk club in the crypt of a church in Richmond that John first played in 1968 and returned to several times up until the early '70s," says John Hillarby, Martyn's longtime archivist, who's been working on the boxset for the past 12 months. "It was a few doors down from another folk club, but this was the big one in the area, and this was a really significant gig in John's history."

"The buzz
is finding
these versions
no-one's heard
since the day they
were recorded..."

Hillarby reckons less than 100 fans attended the show, but luckily one of them kept a high-quality recording straight from the mixing desk, and it now forms part of the five discs of previously unreleased material on the box, in addition to the dozen studio albums made for Island.

"It's an incredible find; very few of John's fans were even aware there was a tape of the gig," says Hillarby, who has been running the official Martyn website since the late '90s. "There's always been a healthy trade in bootlegs of John's stuff, although trade is probably the wrong word. For the most part it's fans exchanging stuff rather than offering it for sale."

Hillarby is still readying the box for its September 9 release and estimates the final running order will be "somewhere in the region of 300 tracks. We've included the 12 Island albums in their entirety, but not many of the extras that were on the Deluxe reissues of things like Solid Air or Grace And Danger. We wanted to put those to one side and focus more on tracks that haven't been heard before."

"There are a few things even Island didn't realise they had because they were hidden away on the other side of reel-to-reel tapes and forgotten about. That was the real buzz for me, finding these versions no-one's heard since the day they were recorded. There's a couple of very nice takes of 'Small Hours' that I wasn't previously aware of."

In addition to the Hanging Lamp gig, the set will also include a 1977 show from Sydney, not heard since it was broadcast on Australian radio at the time, and a reupholstered version of 1975's Live At Leeds including tracks left off the original vinyl. Hillarby and Martyn, who died in 2009, became close friends working on the website, so the boxset has been a labour of love. "John still means so much to me, his music speaks to me every day. Putting this set together has been like having a whole bunch of new conversations with him." 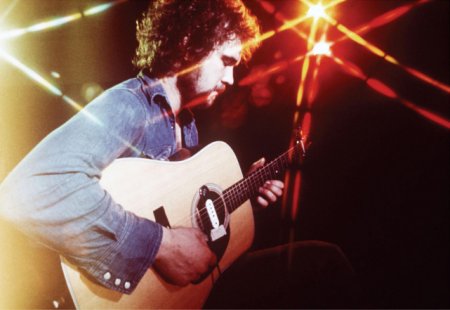 Let the good things come
Inside Out!
Three unheard treasures to be found in John Martyn's Island Years box...
Black Man At The Shoulder

An 18-minute freeform jam of a song Martyn first recorded for One World in 1977, but which Chris Blackwell ordered removed from the album. The Island boss feared the lyric's satire on racism ('Ain't you scared... he's gonna steal your woman away?') might be misinterpreted by listeners, or even the label's black signings. "The National Front were on the news every night, and Chris worried they might adopt it as a campaign song," says Hillarby.

Tommy Tucker's 1964 R'n'B standard was the first record the teenage Martyn ever bought. His own version, an outtake from sessions for 1980's Grace And Danger, is "much jazzier and more Martyn-ified than the original".

The entire 1987 album vetoed by Blackwell, subsequently released in a re-recorded version, funded by Martyn, on an independent label two years later. "That was the parting of the ways with Island, they were expecting something a bit more jazzy and they really weren't happy with it. The label had pretty much let John do what he wanted before, but now his contract was up he decided it was time to move on."

sitenote:
This story was the first piece in the Instant Karma section. It also featured a large picture of John before his Hastings home together with Wesley.
The original Uncut issue had The Band on the cover and cost £ 4.80.

"I soon found that it was pretty difficult to play the saxophone and sing at the same time." (1977, Beat Instrumental)

| Paul Hillery
@bigmuffsite found this but didn't see it on your concert list https://t.co/NurVAf1AVs
10 months 3 weeks ago
END_OF_DOCUMENT_TOKEN_TO_BE_REPLACED