"SO SOUNDS think I'm an old hippy do they?" muses John Martyn as we stand in the hotel lobby waiting for the limo (the manager's estate car actually) to whisk us nearly 100 yards to the gig at Durham University 1. Well, it's raining and he'll get his track suit wet otherwise. "Nooo, that was all too wishy washy. I always wanted to be a beatnik. That seemed to have much more sparkle about it."

Considering it's always been difficult to tar John Martyn with any brush, it's surprising how much he seems to grate against the Sounds youngbloods. A live review a couple of weeks back spent most of its time lambasting what he's supposed to represent rather than what he actually is.

Well Kept Secret is John Martyn's third album since he decided to stop being a solo performer and get himself a band and his most successful to date, climbing into the Top Twenty. Each of the three albums has shown progressively more confidence within the new framework as his homespun melodies settled into their new mode and began to thrive. Now there's a controlled, rhythmic backing that pays due homage to his favourite band, Weather Report, for him to pit his rounded, mellow voice against. 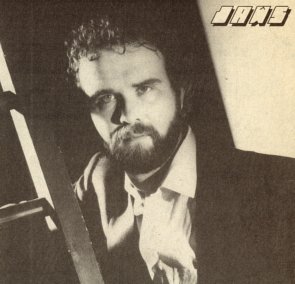 Although he freely admits his roots are in folk, John Martyn has always been something of a renegade, even in that circle. One of Island's first generation of signings back in the late Sixties, he quickly forged his own path through the Seventies, concerning himself with sounds and rhythms that had little in common even with folk-rock, much less the kind of folk that chaps with acoustic guitars were meant to play. It brought him a cult following and an image that is probably why today's young image-conscious rock writers are so suspicious of him.

"There was this thing about 'Let's all go to a John Martyn gig 'cos you can sit around on stage and he doesn't give a monkeys and you can smoke as much dope as you want and occasionally he'll pass you one of his own'," acknowledges John.
"But I started getting very aggressive about that later on. I remember a gig in Bath I did one year with Danny Cummings (now percussion player in John's band) in one of our 'free music' periods when we improvised a long set which did not go down well with the chaps. I started spitting at them and ranting and raving. People really should have more open minds."

TOWARDS THE end of the Seventies Martyn's output became more and more intermittent, although what little there was showed that there was no shortage of fresh ideas using Echoplexes and the like to expand his sound. After One World in 1977, recorded with a whole host of eminent session musicians, there was a three-year gap until Grace And Danger came out in 1980 and placed him very firmly in a band context. And then, almost before you could stick two Rizla papers together, he was out on the road with a band.

"Pure boredom," replies John when asked why he suddenly made the change. "Financially it's a fairly disastrous move -you're immediately giving away nine tenths of your income, I'd have probably done it before if it wasn't for that," he laughs.
"The thing that finally clinched it for me was that I got divorced and no longer had the domestic ties. I could spend the time rehearsing and set it all up. It wasn't a make or break move or anything like that. It may in the long-term turn out to be a wise commercial move, but it certainly isn't in the short-term."

As often happens in such cases, one change produces a chain reaction. And in 1981 John ended a 13-year link with Island and moved to WEA.
He's now back on an album a year and touring regularly with a band, four fifths of which shares his Scottish ancestry. Having missed the last British tour, I was surprised to find just how much Martyn and band had improved since I'd last seen them. The set tends to mirror the flow of his last two albums, the gentle anguished ballads interspersed with frantic but controlled bursts of sound and energy. And John's voice reminded me less of any folk connections than of the Delta blues singers of the Thirties who slipped and slurred their vocals so that their passionate tones became inextricably linked with their instruments. His electric guitar playing has also grown from a supporting to a dominating role with the band.

"I was a bit cautious to start with I think and it was our drummer Jeff Allen who told me after one rehearsal that I should lead from the front more. So I've tried that and everything about the band has improved. It's a matter of putting maximum effort into it and literally trying to inspire the band. That hadn't crossed my mind before I started with a band. Plus the fact that I've only recently started playing electric guitar and it's a completely different instrument to play, particularly within a band, so it took me a while to start playing proper solos".

Leading a band has also brought John a bit closer to the dreaded 'rock and roll biz' of which he's never been too enamoured. Has he therefore tempered his scepticism?
"There are aspects about the music business about which I couldn't be said to be sceptical -I just loathe and detest them. Some of the things that go on are just diabolical...".

So what makes up for it?
"Oh... A good gig makes up for a great deal. A good song makes up for even more. I get a terrific buzz from playing, I really do. It's nerve-wracking to a certain extent and the one thing about working with a band is that you multiply the number of mistakes possible."

He still enjoys playing solo, too. "I still go down to the folk clubs and have a blast when I feel like it. It's great to know that you can still do these things. In fact, I've been toying with the idea of doing away with a support act and playing two sets, one solo and one with the band."
"I just like the changes. Fifteen years ago the idea of me bellowing out Gun Money at the decibles that emanate from the stage now would have been preposterous."

And for those who cynically suggest that John Martyn has simply 'wised up' to the Eighties, he'll take the credit.
"That's a compliment. It's pure coincidence that this album has done as well as it has. Is there something special about the Eighties then? Are these more astute times? I wised up to the Seventies, I suppose I'm wising up to the Eighties and please God I'll wise up to the Nineties. After all, I did my bit posing in front of the mirror with a coathanger when I was young and this is getting closer!"

sitenote:
1 This probably was the gig from October 12 1982 at Durham University.