Six Of The Best

Six Of The Best

A Benefit for Womad 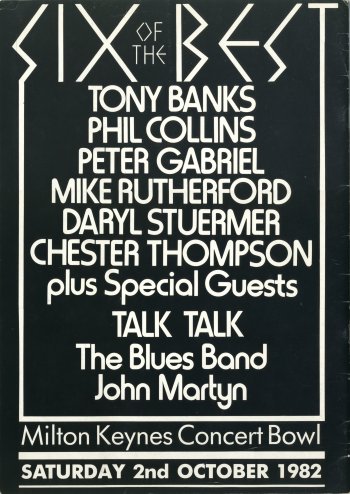 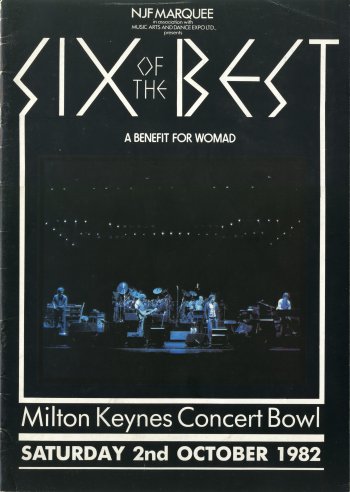 The concert was a benefit for Womad (World of Music, Arts and Dance) and mainly a Genesis affair. This is reflected by the full color program. The cover is Genesis. After the bill we get an extensive Genesis band history of the eight incarnations they had. Two pages of Genesis snapshots. Two pages of covers of Genesis albums (and some Peter Gabriel). Four pages and a spread of concert pictures and comments by individual band members - of Genesis! Two subsequent pages with black and white publicity shots - of Genesis.

Then we get some other stuff. Like a brief description of Talk Talk. And one of The Blues Band. A Talk Talk album advert for The Party's Over. A concert listing of "John Martyn and his band, on tour with guests Durutti Column". And preceding the Genesis merchandise, the following John Martyn introductory text: 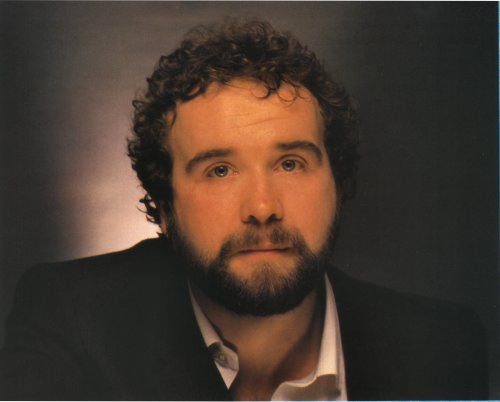 There is nothing predictable about John Martyn. Since he first burst upon the music scene with the 1968 album London Conversation, John Martyn has been serving up quality albums comprised equal parts blues, jazz, folk and rock. Unique among contemporary musicians, Martyn has continually captured public imagination with his curious and sometimes startling blend of influences.

John Martyn was born in Glasgow in 19491, an only child. He first fell under the influence of his mother's love of Debussy at an early age and, later, was welcomed under the formative wing of the infamous Scottish folk singer Hamish Imlach, who introduced him to the local folk scene. At seventeen he was playing solo, exhausting neighbourhood opportunities and planning an essential move South.

On arrival in London, he was spotted by Chris Blackwell, who soon signed him to Island Records. London Conversation was released in February 19682, [a] promising, basically acoustic piece of work. Acclaimed as it was for its interpretive flair, it was The Tumbler, released in December 1968, that added a further dimension to Martyn's music with [a] guest appearance from jazz flautist and saxophonist Harold McNair. Martyn's third album, Stormbringer, was recorded in Woodstock in 1969 and featured his Coventry-born wife Beverley along with the Band's Levon Helm and The Mothers' Billy Mundi. Beverley again appeared with her husband on The Road To Ruin, which featured bassist Danny Thompson, at the start of what was to be a fruitful collaboration with Martyn stretching over several albums.

Bless The Weather, released in November 1971, is now often accepted as Martyn's first true masterpiece; the well of inspiration from which all his subsequent albums spring. Its follow-up, Solid Air, is probably his most popular album. Released in February 1973, its sheer depth and breadth of adventure make it one of the undisputedly great albums of its own, or any other era.

There followed two more albums, Inside Out and Sunday's Child before John Martyn set off for Jamaica in 1975, where he spent time working with Lee Perry and Burning Spear. By the 1977 release One World, John Martyn was exploring the electric possibilities of the guitar, using an Echoplex unit3, an exploration which continued on the 1980 album Grace And Danger. This album emerged as a breathtaking exhumation and exorcism of the breakdown of his marriage with Beverley. The musicians included Phil Collins on drums. Grace And Danger is a dark, brooding album, apparently shelved for a year because Chris Blackwell found it too openly disturbing to release.

"In the past I'd hire musicians for my albums instead of using a band, and the albums tended to sound like they were using hired players," Martyn admits. "This is a group effort, there's more of an interface. I like to keep things moving forward. I don't see myself moving backwards."

For his new album release, Well Kept Secret, Martyn retains the services of Alan Thomson and Danny Cummings, but this time brings in drummer Jeff Allen and keyboardist Jim Prime. There are also guest appearances from the likes of Mel Collins (sax), Ronnie Scott (sax), Martin Drover (trumpet), Pete Wingfield (keyboards) and Lee Kosmin (harmony vocals). The nine new songs are all John Martyn originals, plus there's the added bonus of Never Let Me Go, a hit in the Fifties for the late R&B star Johnny Ace.

John Martyn has confirmed a 33-date British concert tour in September/October, his biggest ever national tour. He will be working with the band members on the Well Kept Secret album, which looks all set to become his most commercially successful album to date.

"They finally discovered the true sequence of DNA.
It is in fact, after all these years, the National Dyslectics Association."