Singing From The Floor 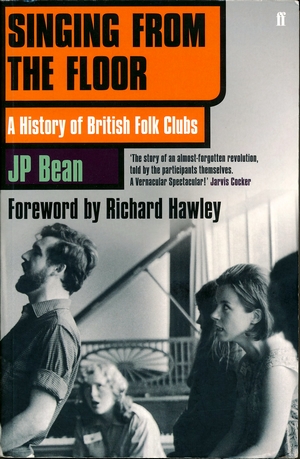 JP Bean (Julian Philip Broadhead, 28 July 1949 - 4 November 2015) wrote among other things the biography of Joe Cocker. He also did a phenomenal job talking to a lot of musicians and people involved in the folk clubs. The book contains detailed info and amusing anecdotes about the genesis and the history of the British and Scottish clubs, how it was to play them and how the business worked.

The form of the 400-plus pages book is interesting: each chapter starts with an introduction, and then people are quoted individually about the subject ('oral history'). John Martyn was not interviewed but gets a few mentions and we have a look at them here. [Unquoted text is paraphrased from the book, ed.]

A very early club was the Surbiton Assembly Rooms (London), run by guitarist and singer Derek Sarjeant and founded in 1961. "In those days, the early sixties, there weren't that many folk singers around and we used to meet together and open clubs for very little money. You'd go miles for a fiver. Diz Disley used to go for a bottle of brandy. It was a great, friendly scene." Sandy Denny was a member.
"John Martyn used to come along, Chris Deja and Keith Relf of the Yardbirds – I taught them the guitar. […] Eric Clapton was a member, he was studying at Kingston Art College. I never heard him play at the club but he's in the membership book, he joined in about 1962. John Renbourn was a member."

In the early days of the folk scene, John apparently did some good work for John James1: "John Martyn was represented by the Sandy Glennon Agency but he wanted off to join Witchseason, which was tied up with Joe Boyd and Island Records. Johnnyboy said to Sandy Glennon, 'The man you need to replace me is John James.' Sandy did what he was told and soon I was off to Brighton, Rugby, Liverpool and Alnwick on the trot, and Sandy Glennon never heard me play."
A similar thing happened in May 1967 when John James had moved to London. There he "had a phone call from some bloke called Win White in Sheffield saying, 'John Renbourn has pulled out and Wizz [Jones] or John Martyn tell me you're the man to fill his shoes.' So the first gig I did up north was the Highcliffe Hotel, Sheffield."

According to Ralph McTell, the Highcliffe "was the best club of its type in the north in my view, because Win White, who probably wasn't part of the social revolution, was actually in it to make a few quid. […] Win booked me, John Renbourn, John Martyn, Wizz Jones and a few of the others, and rotated us." The normal fee for the gig and journey would be eight pounds…

The Troubadour was a famous club in Bristol. Founded by Ray Wilmott it had two floors each with a capacity of sixty people. Two shows were going on at the same time, no alcohol was served and the audience used to be quite young because of that.
And there was no fire escape… "Quite often people who'd done a gig at the Bristol Troubadour would then jump in their car or on the train to London and do the all-nighter at the Cousins." (Ian Anderson).
John the Fish recalls at the Troubadour "The deal was, you did your first half downstairs and then you went and did your first half upstairs. Then you'd come downstairs and do it all again. You didn't get extra money for it. […]" 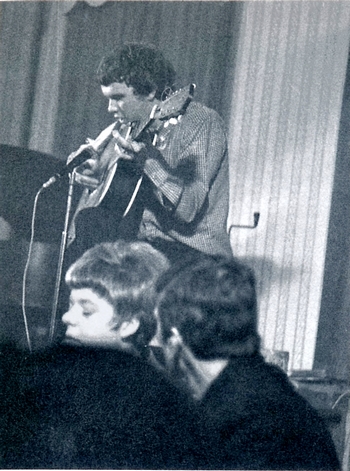 This very early picture of John performing in a club is included in the book. It was taken by Peter Green.

Ian Anderson has a memory "There was a night at the Bristol Troubadour in '71 when John Martyn threw a big wobbler. He was very drunk or stoned and effing and blinding at the top of his voice. The whole audience could hear it and the manager said, 'This won't do. Tell him we don't need him to play. We'll give him his money, we'll get him a taxi to the station. He's not playing.'"
"I drew the short straw 'cos I was standing there. I wasn't happy, but I did it. I then got up on stage and said to the audience, 'Well we have a little local problem as you may have noticed… John Martyn is unable to play tonight. However in the audience we have Keith Christmas, Shelagh McDonald, Dave Evans, Steve Tilston, Fred Wedlock, all of whom will get up and do a couple of songs. If any of you want your money back, ask now. It's not a problem.' Not a single person asked – because every one of those people had an album out on a national label."
"I poured him into his cab and sent him off. Somebody told me the next day that he'd gone up to Cousins and he'd got up on stage, still effing and blinding and he said 'Fucking Bristol – that Ian Anderson, I knocked him out and I left him lying in the street.'"

John James relates "John Martyn was best man at my wedding. The venue was Lambeth Registry Office, January 1970. I'd already been to John and Bev's wedding at Hampstead Town Hall. He wore his tweed suit that day. He didn't wear it to mine."
"Nick Drake turned up at John's wedding, though not for long because Joe Boyd took him off to do some recording in the evening, after a bit of a scare when a girl standing next to Nick stuck a match back in the box after lighting a fag and the whole box went up with a bang. Poor Nick looked quite shaken. Who wouldn't?"
"This was before John thought it a good idea that I should do some gigs with Nick – like look after him, see him okay. We, me and Nick, only did a couple, down at Les Cousins as far I can remember. Anyway on the day of my wedding nothing spectacular happened, except for John M. accidentally smashing a bottle of champagne over the registrar's antique desk."

Wizz Jones. "Ralph McTell's brother, Bruce, tried to manage me, but I'm unmanageable. The first thing Bruce did was, he tripled my fee – and I didn't get any gigs. I didn't have the name. Bruce had Bert Jansch, John Martyn, Ralph and me. He sent me on tour with John Martyn, that was great. John had Paul Kossoff in the band and John Stevens on drums2. They were nutters, they were flying. I loved that tour, but I took a back seat. I kept out of the way. I saw John Martyn at his peak."

Steve Tilston also knew Wizz Jones and played all-nighters at Les Cousins. "This was 1968 and by that time I'd already met John Martyn. He was not long professional, and he played the folk club in Loughborough and came and stayed with us. He had these wonderful elephant cord trousers on and we went to a Chinese restaurant."

John Leonard worked his way up as a floor singer and "When Hamish Imlach first came to the Bay Horse in Doncaster3, he brought John Martyn with him. John got up and we booked him straight away. That's how John Martyn got established. He travelled with Hamish, as did the Humblebums and Barbara Dickson."
"The folk clubs were safe. It was a really kind of vibrant, underground scene. Nobody knew about it. Your parents didn't like it. It was perfect."

sitenotes
1 John James (born 1947 Lampeter, Wales), is a fingerstyle guitarist and songwriter best known for his compositions for the guitar and of blues, folk, ragtime, jazz, and classical tunes.
2 This could have taken place in the course of March 1975. I have one date confirming Wizz Jones as support act in the period: 16 May 1975, Guildford, University of Surrey.
3 The Bay Horse Inn, Bentley Village, hosted the Bay Horse Folk Club, also known as the Freewheelin' Folk Club. It was held in an upstairs room and people had to queue on the stairs to get in.

| Paul Hillery
@bigmuffsite found this but didn't see it on your concert list https://t.co/NurVAf1AVs
6 months 3 weeks ago
END_OF_DOCUMENT_TOKEN_TO_BE_REPLACED