Secrets of a Schizoid Man 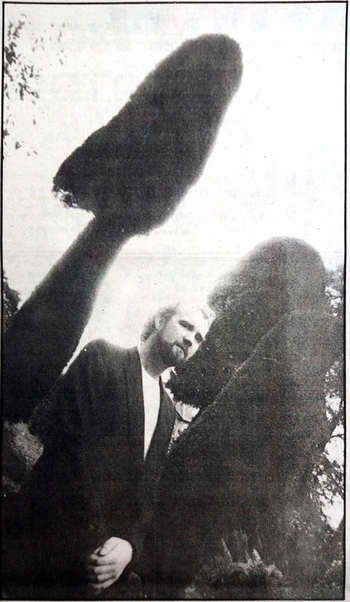 Steve Sutherland attempts to unravel the thinking of JOHN MARTYN.
Pix: Tom Sheehan.
IT WAS Sandy Roberton, John's manager, producer, adviser and umbilical chord to the trends of the Eighties, who finally put my suspicions in focus.
"Did you meet Mr Hyde last night?" he'd inquired with the desperate wit of a worried man and, comically convenient though it may seem, this crudest of all schizophrenia stories seemed somehow to touch on the impulses -past, present and presumably future- of John Martyn, the man and musician.

Stories abound of legendary binges like one time in Bristol when, rocking on the heels of his customary pre-gig bottle of voddy, Martyn's solo spot had been rudely terminated by his old sparring partner Danny Thompson crawling up his legs to offer him 'one more wee dram.'

Today he seems a calmer performer, a precarious loner who's taken on the responsibility of fronting a band, an emotionally scarred brawler who's hired Sandy's hard head to govern his own errant heart. But then again, only the other night he had to be dragged off someone else's pissed roadie for insulting his girlfriend and now, as we speed between Sheffield and Leeds1, Mr Hyde grins at me like a mischievous monkey.

"I got arrested here once," he chuckles, pointing at part of the drab conurbation pelting past the car window. "Got 11 quid for a gig, one of the first times I ever got paid, then went out and got blind drunk and got pulled for... what was it?... speeding, going up a one way street the wrong way and... oh... not having a licence. That's the trouble wi' me an' driving; I only wanna take the wheel when I'm well out of the box and no-one dare argue wi' me. A good case for administering the mallet I'd say!"

Thirty minutes later, pacing a cupboard of a hotel room in Leeds, Dr Jekyll treats our conversation with the animated agitation of a man who's life depends on telling the truth. The interview turns into an interrogation as he struggles with his honesty and it strikes me as an unnecessary intrusion into the motives of a man who documents his emotions so fully on record.

His latest album -Well Kept Secret- is, after all, his most explicit, if not his harshest, to date; an eager adoption of rock 'n' roll, a troubled stab at relevance when most of his so-called contemporaries are settling for their sad consolidations.

A mixture of heady experiment and gratuitous change for change's sake, the new John Martyn roadshow may even seem a gross betrayal to some, but for the careful Jekyll and care-torn Hyde, it's a small price to pay for the invigoration afforded in 'starting again'.

"It's not as if I've suddenly discovered the medium of electric guitar," he insists, "I've used it a lot before. It's just that I've decided to concentrate on it. I mean, to be honest there was a point when I stopped playing for a year because all the acoustic guitarists I was meeting all sounded the bloody same. I had to change what I was doing because, had I remained solo, without sounding arrogant about it, so many people were using techniques that I used years ago that I was in danger of people not remembering that I was first there - they can't be expected to and I wouldn't really want them to anyway."

"But I don't want to be lost in the quagmire of 'Who is this guy? Just another geezer playing with a repeat echo' so I had to change. I mean, I wouldn't like to be sitting still while everyone else is moving."

THIS desire to keep his emotional autobiography vital, this conviction that if anything's worth communicating, it's worth communicating as well and as to many people as possible, this enthusiastic assimilation of folk, jazz, reggae and now rock to keep his repertoire challenging both for him and his audience, is what affords John Martyn the unique reputation of an innovator and entertainer seemingly immune to the ravages of fashion.

In effect, Martyn has never allowed his convictions to cement and he considers himself 'in a fairly heavy learning period at the moment', eager to catch up on new technology.
"I don't like the idea of stopping or just resting on your laurels," he declares. "You should do it 'til you drop. l find that notion truly honourable. I don't find anything sad or tragi-comic about it - I think it's lovely. I can't think of anything better than to die reaching for a high C. Murder on the high C's! Oh fuckin' hell!"

Dr Jekyll sinks to the floor wracked with laughter and Mr Hyde flashes into his face, cheeks puffed, eyes wild.
"I need him," Dr Jekyll admits when his pulse rate returns to normal, "I wouldn't have the bottle to go onstage if I was the person who wrote the songs without Jack The Lad. It's too late to change now. I really enjoy that romantic image anyway and I look upon myself as a very fortunate man, y'know, fortunate that I'm lucky to be so miserable. What's happened actually is the person has almost completely taken over the performer - I feel pretty unified just now."

At odds and yet strangely in absolute keeping with his admission that he's 'the biggest baby I know' and that his 'job' gives him license never to have to grow up, he also claims his standards have changed over the years and that a good song today must sound 'grown up and convinced'.
"Unless things actually concern me intimately, personally, I find it very difficult to mean 'em - I really do!" he exclaims - an admission all the more harrowing in the light of Well Kept Secret.
"No, no, no!" he muses. "It's not a happy album at all. I wish it was. I would like, very much, to make a happy album next time."

At his age, in this world, is it possible?
"It might not be in my case," he agonises. "I'll tell you what it is... I've always had this fascination for Robert Johnson and all those solo figures - Bobby Bland as well. It's a romantic image which I'm associated with and which I actually enjoy. I quite revel in it. It's quite a selfish thing to say but I do. I like a certain amount of romance and turmoil - it's funny; I wouldn't be me if I didn't." 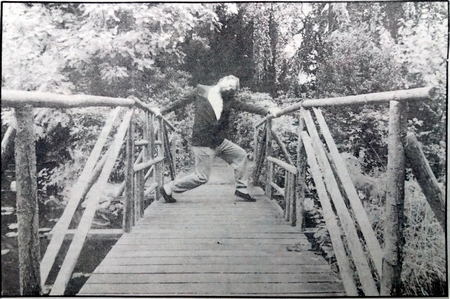 "Whether it's possible for me to make a happy album or not is interesting. I think it probably is… but levity and cynicism are happily married and extant in present pop music and jollity is not."
"See, jollity doesn't have quite the angst that cynicism has. I mean, if you just remove the cynicism from other people's songs -I'm not interested in cynicism at all, it's entirely negative and I strive to avoid it- so if you remove it and wack in a bit of romanticism, I'm writing pretty much the same as everybody else."

CHARTING the course of Martyn's career is much like leafing through the diaries of an idealist; disillusionment taints innocence, hope is seldom reconciled with bitter reality.
"Yes, I have watched my morals be slowly degraded," Dr Jekyll laughs. "There is a grain of truth in that. Certainly as one gets older, it seems life is more and more irrevocable, every step one takes seems somehow more important. Eight years ago it was like: 'OH FUCK OFF!'"

"Now it's like, 'Shall I tell him to fuck off? 'OH, FUCK OFF!' 'Did I mean that? Is this a wise move?' Before, it was more instinctive. The gradual erosion of one's innocence is the thing - that's the one thing I detest, but it's a fact."

Such persistent questioning of his own behaviour makes today's John Martyn a more intriguing and rewarding victim than ever, a man more responsibly aware of his craft. "Writing does become harder," he admits. "It's peculiar - that's why I have to get so out of it to write. I have to get really loaded now. I don't question the songs once they're done though. If they feel right at the time, if they make me feel better… it's very selfish but if it makes me feel better, it's a pretty even chance it's gonna make someone else feel better as well. People do like to realise that there's someone else out there who feels as miserable or as happy as they do. From the letters I get, it seems people can draw emotional parallels quite easily from my songs and that helps."

Midway through recording Well Kept Secret, Mr Hyde went swimming nude near his cottage in Lanarkshire, tried to vault a fence which gave way and impaled himself on a fence post. The wound, in Sandy's words, "looked like a hand grenade had exploded in his armpit" and so great was the pain that, on the way to the hospital, Martyn stopped off for a medicinal bev and arrived sufficiently inebriated to necessitate drying out for 12 hours before the nurses could administer any painkillers. Dr Jekyll had, in fact, punctured a lung and spent most of the subsequent recording sessions so loaded he can't even remember being involved.

It is, therefore, he claims, a complete waste of time angling for clues behind Well Kept Secret and it seems oddly ironic that the self-same life which inspired the album should hinder it's interpretation.
"Yeah," he grins, relaxed, for an instant, "but as soon as the music starts, I'm alright. The great thing about music is, for those sections of my life that I'm playing, I don't actually exist and I'm quite convinced that, while other people are growing old during that time, I'm not."
"I'm just too busy getting on with something and time actually stands still for me so I get a lot of time off that way. Uh... that sounds really weird and hippy doesn't it?... Well I don't care 'cos it's true!"

sitenotes:
1 This means the interview took place in the night of 8 on 9 October 1982.
This interview was printed on page 19 of Melody Maker, 23rd October 1982.
Photo provided by John Neil Munro.
About half of this interview was translated and reprinted in the Italian weekly Boy Music of 2 December 1982. This was included with the national Corriere della Sera newpaper.
Related to:
Well Kept Secret